June always seems to be a busy month for G and M and this year has been no exception to that unwritten rule. As well as the hell that was the lead up to G’s Year 10 mock exams – the exams themselves have proved to be not quite as stressful as we all feared they might be – there’s also been the much more enjoyable enrichment week for M and G’s work experience week too. Add in Live Lounge performances at school, end of year performances with their performing arts schools, we’ve finally found ourselves at the end of June and it’s time to take a deep breath, enjoy the last few weeks of school (if that’s even possible) and look forward to the summer holidays.

Last year, M was part of the school-based activities week as he wasn’t in a position to be able to consider being away from home from a health perspective and this year was no different, although the school makes the decision that all Year 8 students remain on-site, rather than being offered residential trips. After much deliberation, he was fortunate enough to be awarded a place on his first choice activity: the photography course. M really enjoys taking photos and has captured some really stunning snaps using just his phone’s camera at home.

This was an opportunity to learn much more about the craft of photography itself and he spent 4 days learning about shutter speeds, taking action shots, images through water – lots and lots and lots of water! – and using light to write and capture words. He loved every moment of the course and has already decided to start saving up his pocket money so that he can buy his own camera as soon as he practically can.

The Friday was spent on a different activity and much to our surprise, he opted for paint-balling, something that has left him battered and bruised in the past. In fact, M hasn’t been paint-balling since he was hit accidentally by an adult using a high-powered weapon in the wrong part of the course at a

friend’s birthday party. Whilst he wasn’t injured particularly and bounced back very quickly, the experience rattled most of the people there as M had his feeding-tube at the time and he was sore for a few days afterwards. However, the prospect of running around with a group of his friends and their plan to gang up on some of the teachers seemed to excite him and he couldn’t wait to go on the Friday even despite the rain. It was another fun-filled day and he enjoyed it all, even if he did come home sporting a rather impressive bruise to his right thigh by the end of it.

Whilst M had a week of enriching and engaging activities, G meanwhile found herself completing her work experience week. Back at the start of the school year, we had gone through a number of possible posts for her to consider and apply to for the week, but in the end she decided to spend the time working at the surveying firm as Mike. She spent her week learning how to carry out and complete property valuations, building surveys and home-buyers reports as well as the more mundane office and administration tasks that all good work placement employers expect: photocopying and shredding! Her Friday saw her spending the day at a building site and finding out about project management and property insurance claims. G very much enjoyed her week, though her diary entry for the Wednesday perhaps sums it up best – when asked “What have you learned about work this week?“, her honest response was “That it’s exhausting!“

September can really only mean one thing: the start of the new school year and all that that entails. This year it has been just that little bit more hectic than usual as some things have changed significantly, whilst others have remained strangely static. G has moved up into Year 8 and is already embracing the addition of 3 new subjects to her timetable,very much enjoying the extra lessons of French, Dance and Drama as well as the move from Food and Textiles to Product Design. With the new school year, so there is also a new school uniform and whilst G is still a little sceptical about its appeal, I am delighted with how smart she looks, though only time will tell if that will last for the full year or not. M is at the start of the final year of his Junior school career and I still can’t quite believe that my baby is  now one of the oldest in the school. We know that this year will be full of challenges from an educational point of view, but with the continued support of his teachers at school and a full year of specialist lessons at our local Dyslexia centre, we are confident that he will be able to achieve his very best.

This September has also signified some major decisions about my own career after I was made redundant out of the blue at the end of the last school year. I am incredibly fortunate that my accountancy training meant that I was offered a new job within a remarkably short time-frame and I started that position the week before the children headed back to school. I felt encouraged by my new role and yet the last 2 weeks

have been filled with unexpected angst as one of the other positions I had applied for requested an interview and then offered me the job. After hours of deliberation and discussion and numerous sleepless nights, I have decided to accept this second role as it is an incredibly exciting and challenging position that I believe I would regret turning down. I am really looking forward to starting this new job at the beginning of October, which will bring some significant changes to our household as I will be back to working full-time hours for the first time since G was born, although I am lucky that they are happy to give me flexible hours and everything I need to sometimes work at home.

September has also been the month where we enjoyed a flying visit from Grandma and Grandpa, Mike’s parents, from Canada. G and M were so excited to see their grandparents for the first time in 4 years that they created a banner to welcome them when we went to collect them from our local airport. 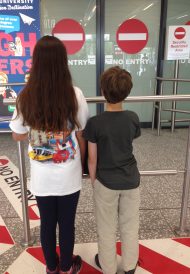 Mike finally finished the renovation job on our 4th bedroom, a task that had been started back in April,
but was interrupted first by the whole saga of M’s broken leg and then the demands of work and our summer holiday in Portugal. The room looks great, but his parents never got to sleep there as Mike had a last-minute panic that the futon bed might be too low for them and instead they slept in G’s room, whilst our gorgeous girlie moved to the freshly painted spare room for a few days. G, M and I all had to be at school and work as normal, but Mike spent some precious time with his parents before they returned home. It was a busy few days for us all, but we managed to squeeze in some family meals and board games where we could.

In the midst of all that busyness, there is one thing that has remained relatively static and that is the current position with M’s health, a real mixed blessing. The last year has been filled with numerous food trials, including during our disastrous admission at GOSH last December, but M is still stuck at just 5 safe foods and despite our hopes to start challenging him again soon, he is not even close to being symptom-free, something we’ve been striving for since his leg came out of plaster at the start of the summer. We are surviving in limbo with minimal medical input as the plan to start some shared gastro care with our local hospital has not yet materialised and we are not due back to GOSH for another couple of months. It is very difficult to see where the next few months will take us, particularly when you add in the added stresses of his Year 6 SATs, and so Mike and I are hoping for the best, but preparing for a bumpy ride.