I’m not quite sure how this happened. Two years ago marked the end of G’s Junior school career and now we find ourselves at the cusp of a new adventure for us all as M’s time at the Juniors similarly draws to an end. The past 4 years have been a true roller-coaster ride and the staff at our wonderful village school have been there for every step of the journey. From the moment we stepped through their doors, they have embraced the challenges of having M in the school and provided the whole family with the support we’ve needed to get the children through all those ups and downs relatively unscathed.

In some ways, the last 6 months have been the toughest of his school career, even more so than the NG-tube and broken leg we’ve dealt with in that time. He wasn’t able to attend his Year 6 camp because of poor health, but he found the joy in spending the day there getting muddy with his friends instead. We survived the stresses of SATS and celebrated in style last weekend when we found out just how well he did in passing them all. We’ve enjoyed the Year 6 production of The Wizard of Oz and are finally winding down to the Leavers’ Service at the end of the week.

This comment in his end of year report from his class teacher reflects the wonderful young man he is growing up to be:

“He is an inspiration to his peers that in spite of his health issues, he participates fully in everything and does not use his illness as an excuse not to try….Thank you M, for being such a valuable member of the class this year. You contribute more than perhaps you realise!”

As we wave goodbye to the end of an incredible era, there will be more than one tear shed along the way, but we are preparing to embark on the next big adventure, building on the incredible foundation that has been put in place with great care, love and consideration over the last few years:

September can really only mean one thing: the start of the new school year and all that that entails. This year it has been just that little bit more hectic than usual as some things have changed significantly, whilst others have remained strangely static. G has moved up into Year 8 and is already embracing the addition of 3 new subjects to her timetable,very much enjoying the extra lessons of French, Dance and Drama as well as the move from Food and Textiles to Product Design. With the new school year, so there is also a new school uniform and whilst G is still a little sceptical about its appeal, I am delighted with how smart she looks, though only time will tell if that will last for the full year or not. M is at the start of the final year of his Junior school career and I still can’t quite believe that my baby is  now one of the oldest in the school. We know that this year will be full of challenges from an educational point of view, but with the continued support of his teachers at school and a full year of specialist lessons at our local Dyslexia centre, we are confident that he will be able to achieve his very best.

This September has also signified some major decisions about my own career after I was made redundant out of the blue at the end of the last school year. I am incredibly fortunate that my accountancy training meant that I was offered a new job within a remarkably short time-frame and I started that position the week before the children headed back to school. I felt encouraged by my new role and yet the last 2 weeks

have been filled with unexpected angst as one of the other positions I had applied for requested an interview and then offered me the job. After hours of deliberation and discussion and numerous sleepless nights, I have decided to accept this second role as it is an incredibly exciting and challenging position that I believe I would regret turning down. I am really looking forward to starting this new job at the beginning of October, which will bring some significant changes to our household as I will be back to working full-time hours for the first time since G was born, although I am lucky that they are happy to give me flexible hours and everything I need to sometimes work at home.

September has also been the month where we enjoyed a flying visit from Grandma and Grandpa, Mike’s parents, from Canada. G and M were so excited to see their grandparents for the first time in 4 years that they created a banner to welcome them when we went to collect them from our local airport.

Mike finally finished the renovation job on our 4th bedroom, a task that had been started back in April,
but was interrupted first by the whole saga of M’s broken leg and then the demands of work and our summer holiday in Portugal. The room looks great, but his parents never got to sleep there as Mike had a last-minute panic that the futon bed might be too low for them and instead they slept in G’s room, whilst our gorgeous girlie moved to the freshly painted spare room for a few days. G, M and I all had to be at school and work as normal, but Mike spent some precious time with his parents before they returned home. It was a busy few days for us all, but we managed to squeeze in some family meals and board games where we could.

In the midst of all that busyness, there is one thing that has remained relatively static and that is the current position with M’s health, a real mixed blessing. The last year has been filled with numerous food trials, including during our disastrous admission at GOSH last December, but M is still stuck at just 5 safe foods and despite our hopes to start challenging him again soon, he is not even close to being symptom-free, something we’ve been striving for since his leg came out of plaster at the start of the summer. We are surviving in limbo with minimal medical input as the plan to start some shared gastro care with our local hospital has not yet materialised and we are not due back to GOSH for another couple of months. It is very difficult to see where the next few months will take us, particularly when you add in the added stresses of his Year 6 SATs, and so Mike and I are hoping for the best, but preparing for a bumpy ride.

Sports Day conjures up so many memories for me: of races run, giggles with friends, frenzied cheering and the exhilaration of realising that your House has actually won the coveted cup.  A day full of so many heightened emotions and today, for me, held more than any other in the past.  Not surprisingly I wondered what the day had in store for M and worried a little about how he’d manage the races with his cumbersome pump pack strapped to his back and his tube taped to his face.  And it was the end of an era for G.  We’re in to the final stretch:  May half-term is over, SATs have finished, the Year 6 production rehearsals are ramping up and in less than 6 weeks time, my first baby will have finished her Junior school years and “big school” beckons for September.

One of the very many things I love about the kids’ school is that they still hold a competitive Sports Day, where winning means something, but is not as important as team spirit, or encouragement, or taking part. or cheering for everyone in the race, whichever House they represent or whatever position they finish.  I still remember the very first Sports Day I saw at this school, when G moved there half-way through her Year 4 year.  I was instantly impressed by the support and encouragement given to, and by, every year group to each other.  I saw Year 6 boys cheering their peers on, waiting by the finish line to welcome the last child in, 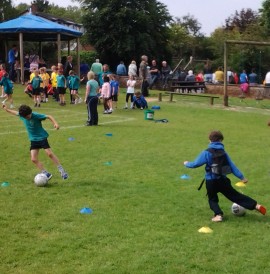 however old they were and thumping them on the back for a job well done. When I saw that I knew that we had made the right decision in choosing this school for our pair and looked forward to them becoming a part of it.

Three years on from that first Sports Day and I stood proudly on the sidelines cheering both my children on. The first half of the morning was occupied with following M’s class around the circuit of team races and the occasional mad-dash removal of his pump pack when it suddenly became evident that neither skipping ropes or sacks were going to work with a heavy back-pack in situ. He took part in every activity and my heart swelled when his entire class chanted his name as he completed a second turn in the sack race for his House. For his lap in the family relay – a team consisting of one child from each year group – 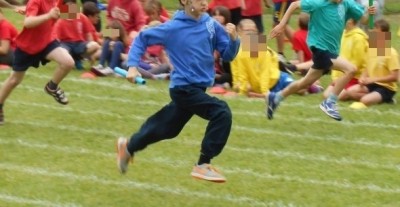 he and I agreed that he could race pump free and with his tube strapped down and, boy, was it worth it. He flew down the track at lightening speed, proving to all watching that his tube really doesn’t stand in his way, especially not when it comes to winning points for his House.

Disappointingly, I couldn’t watch as much of G as I would have liked, but despite only being able to watch her complete one of the initial team races, I was able to cheer her on during what I was thought was her only other event, the over-and-under race.  To my surprise, as she and I stood side-by-side watching M run his relay, surrounded by their House, she announced that she was also running in the Year 6 girls’ relay, a race I would have never anticipated her taking part in as she’s really not a runner at heart.  And so, this year’s Sports Day experience finished in fine fashion with M taking G’s place next to me, cheering his big sister on as she competed in her final race of her Junior school days.