I wouldn’t usually think to write about where we’ve found to eat out in London as over the years we’ve often frequented one of the very many chain restaurants that we’ve come to know and love, but this time we spread our wings a little bit further and I thought it worth sharing our latest mealtime experiences.

Our Thursday evening dinner was courtesy of that old favourite of ours, Pizza Express, who were conveniently located less than 5 minutes from our hotel in Southwark, though there are many branches you can choose from no matter which part of London, or the rest of the UK, you’re in. In the 8 years or so that we’ve been frequenting their restaurants, we have only had a poor experience on one occasion, when they had run out of gluten-free pizza bases but failed to inform us until we were placing our order. Thankfully, even then, the restaurant staff worked hard to prepare other safe food for both G and M and both children managed to eat well. G  is very much a creature of habit when it comes to her food, so I knew she was likely to order the GF dough balls followed by an American pizza with goats cheese; and so she did. M loves to peruse the menu whenever he gets the chance, but this time chose a meal almost perfectly matching his sister’s, simply changing her goats cheese for the vegan mozzarella instead. The order came quickly, the food was delicious, there was no confusion or hassle about their orders and we left the restaurant with our appetites pleasantly sated,

Breakfast on Friday was a typically low-key affair and eaten in our hotel room as we had done our usual and carried travel containers filled with safe cereal for G and M to eat. M and I managed to find a small Sainsbury’s near to the theatre on the Thursday evening, so had popped in after the show to pick up a carton of rice milk. We have found that this is a routine that works really well for us and reduces the stress of choosing safe breakfast options for both children to eat. M’s only apology was that he had forgotten to research the nearest Starbucks to our hotel so that I could start my day with a coffee, but was quickly reassured when we reached the Globe theatre to spot one just across the street from it. 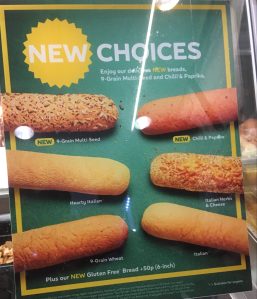 No sooner had we finished our Globe theatre tour, than M was clamouring for lunch even though it was only around 10.45 in the morning. This was not the result of an overwhelming hunger on his part, but rather great enthusiasm from both him and G as we had discovered a Subway sandwich shop near the Tower of London which stocked GF bread, which was also dairy- and egg-free, and they couldn’t wait to give it a go. During our holiday in Canada last year, we had seen GF bread available at the Subway on Toronto Island, but had not opted to buy one as 1) we had a packed lunch with us and 2) we had rather foolishly assumed that we would be able to buy it at other stores too. We were very much wrong in that assumption and have spent the last 12 months trying to find a shop serving GF bread somewhere in the UK, so you can just imagine how excited they both were to finally try a sub.

We were impressed with the service provided and care taken, even during a fairly busy lunch service during the summer holidays. The staff changed their gloves before handling the GF rolls for the children’s sandwiches – without me having to ask – and there was detailed allergy information available indicating the top 14 allergens present in all of the sandwich fillings and toppings. It was a strangely emotional experience as I watched

G and M decide what sandwiches they wanted to try and pick out the toppings they wanted to add to make their perfect lunch. Here were my 15 and 13 year-old children, who have never been able to order at a Subway before because of their allergies, finally eating just like their friends. The look on both their faces as they made their decisions was priceless and their verdict on lunch – perfect!

We had booked tickets on a late train home to give us enough time to enjoy our planned excursions as well as the unplanned ones, and the final trip of our day was to one of our family favourite places to eat, although we hadn’t yet tried the London branch. Do you know where we went? Well, I’m afraid that’s a story for another post.

Whilst I wouldn’t recommend spending an hour or so wandering the streets of Glasgow looking for somewhere to buy the right kind of cereal with a stroppy 12 year-old and his big sister in tow, I have to be grateful that we stumbled a great little cafe which provided us with the allergy-friendly packed lunch we hadn’t actually realised we were looking for.

iCafe, Sauchiehall Street – As we trudged our way down the street, Mike spotted this unassuming cafe and suggested we stopped to take a look at the menu before we went on too much further. Our eagle-eyes spotted both the gluten-free bread option to accompany the soup and the vegan offerings, so it didn’t seem like too big a leap to hope that they might be willing to make us some gluten- and dairy-free sandwiches to take with us for our lunch later that day. We made a quick decision to allow M to have a “treat” and agreed that he could have a chicken and bacon gluten-free sandwich (no spread) as his lunch choice. He has long been hankering for some bread and we all agreed that this was a fantastic opportunity for him to do so. I was also impressed by the selection of allergy-friendly snacks they had on display and G was also thrilled to have a soya-milk hot chocolate to take away with her and enjoy as we headed towards the bus stop. These toasted sandwiches went down a storm whilst we were at the Riverside museum and I was delighted by this unexpected find.

Hard Rock Cafe Glasgow – This isn’t the first time we’ve successfully eaten at a Hard Rock Cafe, having tested the allergy-friendly mettle of those in both Lisbon and Athens over the last couple of years. I think that now is an opportune moment to confess that I am something of a die-hard Hard Rock fan and love nothing more than visiting the Hard Rock Cafes of the world, picking up a City Tee in each location to add to my collection. G and M have become mini fans too and every time we travel anywhere, once of M’s first questions is whether there’s a HRC for us to go to whilst we’re there. It was therefore inevitable that our dinner would be at the

Glaswegian Hard Rock Cafe and G decided to try something a little bit different by ordering the GF pulled pork sandwich with chips for her main course. M agreed to compromise on what he really wanted and played it safer as he had already had the GF bread earlier in the day, finally opting for a plain GF burger accompanied by a chicken breast, bacon and cucumber sticks.

Despite the initial run-in we had with our waitress, who wasn’t prepared to accept my first answer that it was easier to tell her what M could eat, rather than list his allergies in full, we eventually convinced her to work with us and with the restaurant manager to place our order. Once they had grasped what we were trying to explain when it came to feeding M, things turned round quite quickly and I absolutely cannot criticise the care that was taken with the children’s meals for the rest of our dinner. Once again we enjoyed a superb meal at yet another restaurant from my all-time favourite chain and wouldn’t hesitate to recommend a visit there to anyone with allergies.