The first day of December heralds the start of the busy season for most, but an especially hectic time in our household.  As well as the much-awaited day itself with all the associated celebrations at school, work, choir and church, we also have to fit in a 10th birthday and a wedding anniversary.  This weekend we got the ball rolling in fine fashion with an early birthday celebration for G.

Whilst G is most definitely a December baby, this year other commitments near her birthday led to my decision to throw her party early and sneak it in at the end of November instead.  The first discussion was about the format her party was going to take.  G was keen to combine cooking or baking with a sleep-over.  I was less keen.  The prospect of organising a group of near 10 year-olds (and two 7 year-old boys) to prepare, cook and possibly decorate a selection of M-friendly foods lacked appeal.  Add in M’s inability to settle and sleep at the moment and I could see that it was more likely that full-scale battle would break out, rather than the joyous birthday celebrations G had in mind.

Thanks to some wise words from Canadian friend F, I found the perfect solution – a pizza-making party at Pizza Express.  Now I appreciate that throwing a pizza party for a child with wheat- and dairy-intolerances and her multiple food-allergy suffering younger brother sounds somewhat off the wall, but thanks to the gluten-free menu introduced by Pizza Express earlier this year, we knew it was a viable option.  We discussed our requirements with our local restaurant and were reassured that both children could participate fully and work around their dietary restrictions.

The date was duly booked, invites sent, travel arrangements made and finally the day dawned.  Following our prompt arrival at the restaurant, each child was given an apron and hat to don before their starters of garlic dough balls and a side salad were served.  Thanks to the information provided by Pizza Express, I was fully equipped for all eventualities and the chef was able to lightly toast 4 slices of M-friendly bread, which was served with garlic butter that I had prepared at home.

Next the task of making the pizzas themselves.  G, M and their friends were given a ball of pizza dough each and were then instructed in the art of rolling, pressing out and filling the pizza pans.  The children had varying success with their pizza bases, but eventually, after a couple of false starts, everyone had a base to be proud of.  They were then given a selection of toppings to add before their pizzas were baked in the ovens.  G and M were able to take full part in this, preparing pizzas for Mike and me to enjoy. 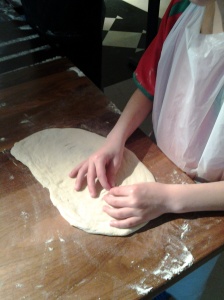 Stretching and fitting the dough to the pan 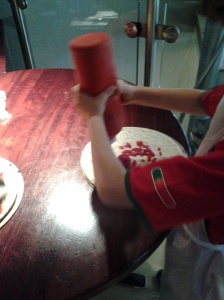 Adding the GF tomato sauce to the base

Once these pizzas were ready to be cooked, G and M were then given the opportunity to make their own lunch.  Our party host was fantastic and explained just how Pizza Express make sure that their GF options are kept safe from the risk of cross-contamination in their kitchens.  The GF pizza bases are pre-made and kept in separate storage as is the GF tomato sauce for the base and they use different pizza pans to cook the GF pizzas, which are easily distinguished from the normal ones.  I had brought our own supplies of grated goats’ cheese for G and chunks of Violife vegan cheese for M, which is both dairy- and soya-free.

We finished the meal with a small portion of ice-cream with various toppings they could add at their discretion.  Once again I had been able to bring with me a tub of Booja-booja chocolate ice-cream for G and M to enjoy and was thrilled to discover that the Pizza Express toffee sauce was safe for them too as the party host had made the effort to check the detailed allergy listing for all their products and could reassure me that it was safe. 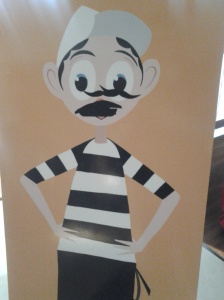 All the children had a wonderful time and we were hugely impressed by the attention to detail that PIzza Express makes to ensure that their allergy-friendly options remain safe, even down to serving G and M’s pizza on separate platters to once again ensure no cross-contamination occurred.  It was a real treat to be able to offer a “normal” birthday experience to G and for them both to enjoy the birthday celebrations with their friends.

6 thoughts on “A Pizza Express birthday”