“10 days” seems to have become a mantra for our holidays over the last few years. Be it Portugal, Greece or Scotland, we’ve had some amazing fun, making memories and just spending time together. Here’s the photographic proof: 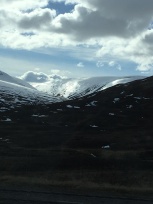 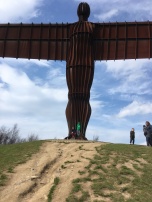 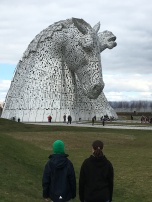 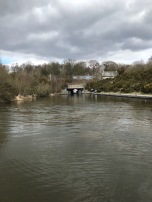 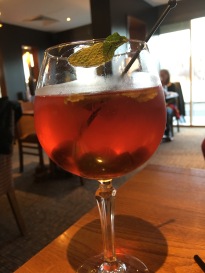 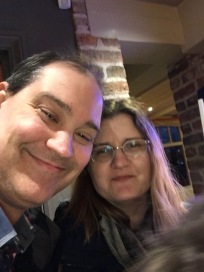 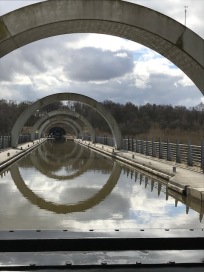 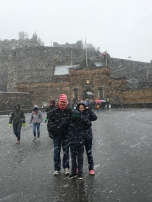 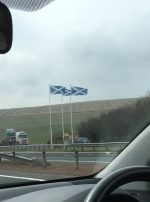 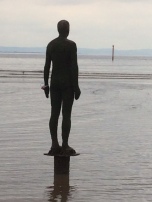 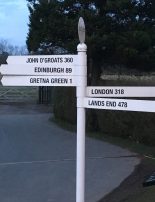 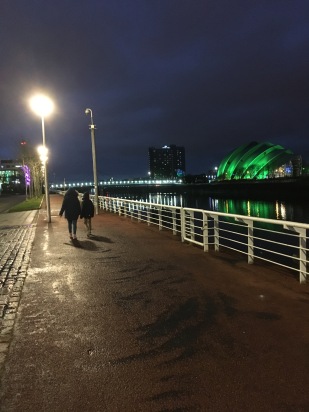 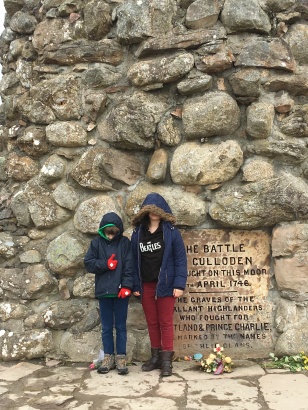 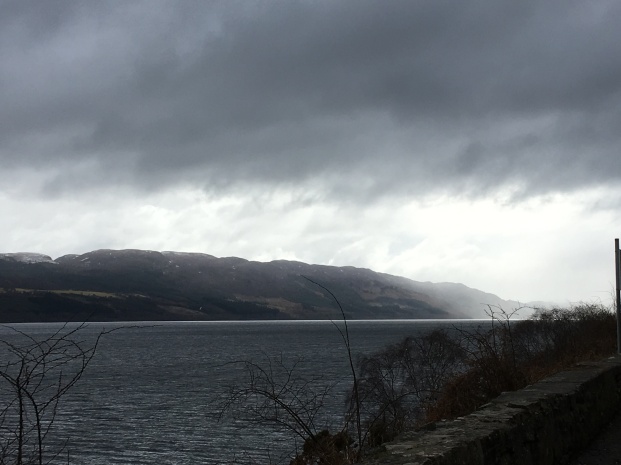 Looking back now, 2 months on since our Scottish adventures, I can’t believe just how much we did in what really was so short a time. Having “done” Glasgow, our next major destination was through the beautiful, snow-tipped Cairngorms to Inverness, but not before we had stopped off to experience 2 unmissable sights – the Falkirk Wheel and the Kelpies. 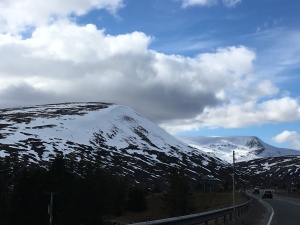 When we first started planning our trip to Scotland, so many family members and friends told us that we absolutely had to visit the Falkirk Wheel and warned us to pre-book our tickets to make sure that we didn’t miss out that we both took heed and booked our Easter Sunday day out.

The engineering wizardry of the wheel, which was the world’s first rotating boat lift when it was opened in 2002 to link the Forth & Clyde and Union canals, had M absolutely hooked from the moment we showed him the website and he couldn’t wait to actually experience it in person. The transition from the lower canal to the higher one (and back again) is unbelievably smooth and you hardly realise you are moving 35 metres into the air on a remarkable man-made structure, planned in Lego and powered by the energy required to boil just 8 kettles for tea. Without a doubt, it is an impressive sight to observe and having done our “turn” on it, we settled in at the cafe for a light allergy-friendly lunch accompanied by a side order of a great view of the wheel doing its thing as we ate. 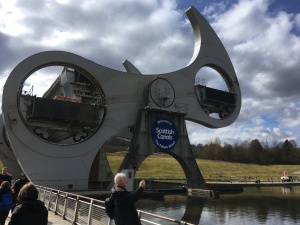 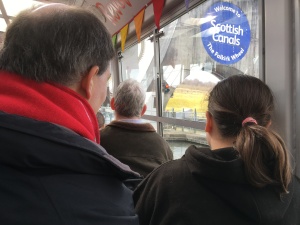 The tour guide on our boat gave us so many facts and figures about the Wheel that it seemed almost impossible for the children to absorb many of them and yet, even now, they still remember the ones that particularly fascinated them whilst we were there. As we looked out from the top canal towards the Firth of Forth, we heard about the Kelpies just a short drive away and knew without a shadow of a doubt that we absolutely couldn’t head further north until we had taken our horse-mad girlie to see these amazing structures. 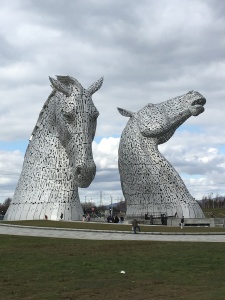 Built in a phenomenally short space of time in 2013 to form a gateway to the eastern entrance to the Forth & Clyde canal, this monument encapsulates the mythical beauty of the water spirits of Scottish folklore whilst forming a fitting tribute to the horse-powered heritage of Scottish industry. These 30-metres high horse heads are simply breathtaking to see and although we didn’t have time to enjoy the Easter sunshine with a walk through the Helix parkland project, we all relished the opportunity to stretch our legs and even perfect some dance steps on the way to the structures. All in all, it was a perfect way to spend a peaceful Easter Sunday with family and one that perfectly combined so many varied aspects of the Scotland we were slowly discovering each day.

Whilst I wouldn’t recommend spending an hour or so wandering the streets of Glasgow looking for somewhere to buy the right kind of cereal with a stroppy 12 year-old and his big sister in tow, I have to be grateful that we stumbled a great little cafe which provided us with the allergy-friendly packed lunch we hadn’t actually realised we were looking for. 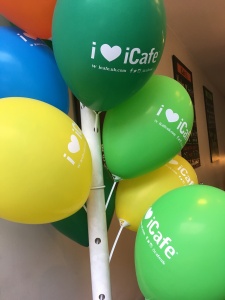 iCafe, Sauchiehall Street – As we trudged our way down the street, Mike spotted this unassuming cafe and suggested we stopped to take a look at the menu before we went on too much further. Our eagle-eyes spotted both the gluten-free bread option to accompany the soup and the vegan offerings, so it didn’t seem like too big a leap to hope that they might be willing to make us some gluten- and dairy-free sandwiches to take with us for our lunch later that day. We made a quick decision to allow M to have a “treat” and agreed that he could have a chicken and bacon gluten-free sandwich (no spread) as his lunch choice. He has long been hankering for some bread and we all agreed that this was a fantastic opportunity for him to do so. I was also impressed by the selection of allergy-friendly snacks they had on display and G was also thrilled to have a soya-milk hot chocolate to take away with her and enjoy as we headed towards the bus stop. These toasted sandwiches went down a storm whilst we were at the Riverside museum and I was delighted by this unexpected find. 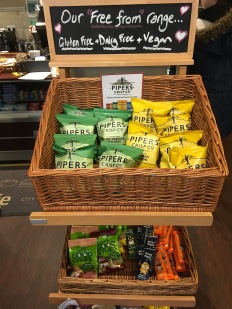 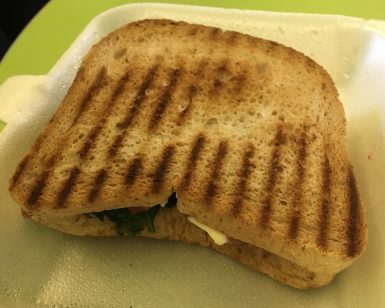 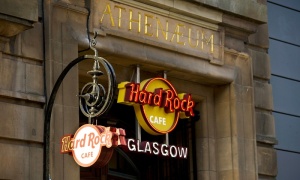 Hard Rock Cafe Glasgow – This isn’t the first time we’ve successfully eaten at a Hard Rock Cafe, having tested the allergy-friendly mettle of those in both Lisbon and Athens over the last couple of years. I think that now is an opportune moment to confess that I am something of a die-hard Hard Rock fan and love nothing more than visiting the Hard Rock Cafes of the world, picking up a City Tee in each location to add to my collection. G and M have become mini fans too and every time we travel anywhere, once of M’s first questions is whether there’s a HRC for us to go to whilst we’re there. It was therefore inevitable that our dinner would be at the 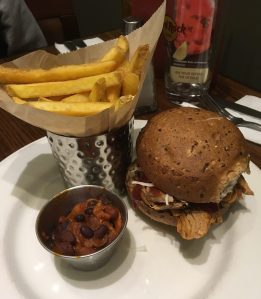 Glaswegian Hard Rock Cafe and G decided to try something a little bit different by ordering the GF pulled pork sandwich with chips for her main course. M agreed to compromise on what he really wanted and played it safer as he had already had the GF bread earlier in the day, finally opting for a plain GF burger accompanied by a chicken breast, bacon and cucumber sticks.

Despite the initial run-in we had with our waitress, who wasn’t prepared to accept my first answer that it was easier to tell her what M could eat, rather than list his allergies in full, we eventually convinced her to work with us and with the restaurant manager to place our order. Once they had grasped what we were trying to explain when it came to feeding M, things turned round quite quickly and I absolutely cannot criticise the care that was taken with the children’s meals for the rest of our dinner. Once again we enjoyed a superb meal at yet another restaurant from my all-time favourite chain and wouldn’t hesitate to recommend a visit there to anyone with allergies. 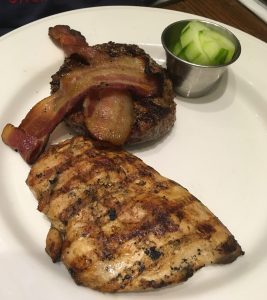 When we first started planning our holiday in Scotland, I had a quick internet search to try to uncover what there would be to do and see for the few days we were in Glasgow. Disappointed by my search results, I turned to my Mum who has visited there in the past to see if she had any recommendations to make, but her comments were equally sparse, though perhaps more understandably given she had been there for the Commonwealth Games in 2014. 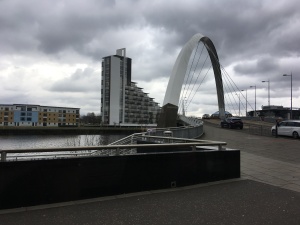 Having now spent less than 48 hours in this city, I can honestly say that it’s somewhere that I would like to visit again and take the time to go to some of the hidden gems that we didn’t discover until this trip. There were, however, 2 things that we all agreed were a “must-do” whilst we were there – the hop-on, hop-off bus tour and the Hard Rock Café!

Our day started out a little less successfully than we’d have liked. M had munched his way through the cereal I had brought and was in desperate need of a new box to supplement his banana and milk. It was cold and wet, though we had planned for the likelihood of wintery weather conditions in Scotland in late March/early April so were well equipped with hats, gloves and coats; and even worse, as far as the children were concerned, we had to do some walking before we could join the bus tour around the city! 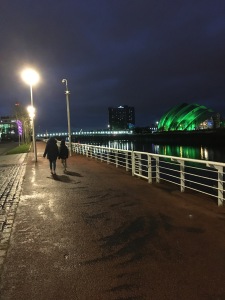 Our hotel was conveniently located opposite the SSE Hydro and SEC Centre, both of which look incredibly impressive when seen all lit up from across the river at night. Unfortunately, we didn’t have much luck in finding the Nestle GoFree rice pops that are M’s current favourite breakfast cereal, though we did stumble across a great little cafe where we were able to pick up some freshly made gluten-free sandwiches for lunch.

With Mike fully laden down with sandwiches, soft drinks and other suitable snacks, we finally made it to a bus stop, bought our tickets and settled down on the next bus for the City Sightseeing tour of Glasgow. M absolutely loves taking these bus tours whenever we’re visiting somewhere new and it really is a great way to learn a little more about where we are as well as being a helpful way of planning the rest of our time in the city. Our plan for Glasgow was to complete around half of the bus tour before we reached our next destination and our stop for lunch, and for the afternoon. 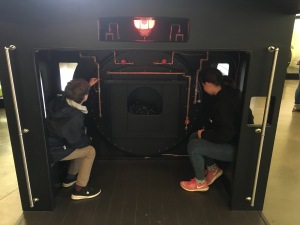 Despite our pitiful attempts to find something to do in Glasgow before we arrived, the success story of our time there was the Riverside Museum – and that discovery was thanks to the tenacity and determination of our youngest.

M had taken very seriously the responsibility for finding things to do or visit or see in every place we visited and on the night of our arrival, spent some time before bed scouring Google to find somewhere to go. He had stumbled across the Riverside Museum and instantly announced that he was keen to go there, confident that we would all enjoy what it had to offer. I’ll be honest to say that a transport museum didn’t initially sit at the top of my list of things to do, not least because I’ve been involved in setting up a similar museum over the last 18 months, but I will absolutely take my hat off to him as it was an absolute success. We spent a fantastic afternoon in this gem of a museum, that had more cars, cycles, boats, planes, trains and motorbikes squeezed into the space than you can even begin to imagine. 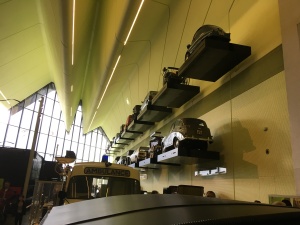 We have visited very many museums over the years, but this exhibition is truly incredible and all 4 of us would highly recommend it to anyone planning a visit to Glasgow in the future.

Our time at Riverside drew to an end and we caught the penultimate bus back into the centre of Glasgow, finishing the tour we had started a few hours earlier. The final destination for our day was the Hard Rock Cafe and it was just a short walk from the final bus stop to the restaurant for our last dinner in Glasgow. We didn’t spend a lot of time in this glorious city and there are definitely things I wish we had done whilst we were there. Of course, the answer to that dilemma is an easy one – it just requires another visit to Glasgow to be planned!