You might not have realised it, but last week saw the celebration of “National Popcorn Day” in the USA – a day dedicated to “drawing awareness to popcorn and the never-ending amount of fun you can have with it!” Unfortunately, popcorn is currently yet another treat that M cannot enjoy due to a failed food challenge, but a revisit to my Kracklecorn post from last year reminded me of a popular chicken fast food chain and its popcorn chicken nuggets, This dish brings back fond memories of Mike’s grandmother, who loved this treat and of trips to the nearest KFC to pick up a portion or 2 for dinner whenever we were back in Canada and making a visit to see her.

January has been something of a grey month for M, who has struggled with giving up the foods unsuccessfully reintroduced during his GOSH admission. His health is infinitely better than it was 6 weeks ago, but my plucky 9-year old has found it tough to see eggs, potatoes and bananas disappear back out of his diet after such an intense period of eating them, no matter how ill they made him. Determined to develop a new recipe to cheer him up a little, and inspired by my Canadian recollections, I researched a number of popcorn chicken recipes to see if I could recreate this fast food treat. Despite a continuing absence of safe foods for M, we have been able to successfully expand his repertoire of herbs and spices and I wanted to introduce some quite bold new flavour combinations to tantalise his taste buds. Some of the recipes I found suggested using an Indian spices theme and, as India just happens to be M’s topic for the new school term, this seemed the perfect opportunity to prepare an Indian-style popcorn chicken for dinner.

Thanks to the ever-present box of Nature’s Path Crispy Rice Cereal, the only safe cereal M can eat and actually enjoys, my trusty deep fat fryer and a selection of Indian-esque spices from my kitchen cupboard, I blitzed up a crumb coating, added my chicken 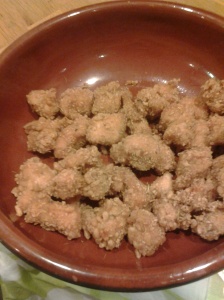 and kept my fingers crossed. The first batch looked delicious and I couldn’t wait to take a sneaky bite or two to…ahem…”taste test” before serving them to my discerning public. The smell wafting through the house worked better than a dinner bell and first one child, and then the other, drifted to the table with washed hands, ready to try dinner. For that first meal, I prepared 2 chicken breasts worth of popcorn and left my youngest bitterly disappointed that there was absolutely not another morsel left for him to consume. Subsequent meals have seen bigger portions prepared and disappear in similarly quick fashion, and I’m delighted to have found another winning recipe for dinner. Mike has also declared my popcorn chicken a huge hit, even though all he’s been able to scrounge has been the sparse crumbs left once G and M have emptied the bowl. They really were “finger lickin’ good!”.

We are generally not a fast-food eating family, which, given the array of allergies we’ve had to deal with over the years, is probably a good thing. It’s not something we’ve noticed we’re missing out on and I doubt we’d ever be burger joint regulars even without the allergies, but all that being said, there are definitely times when being able to pick up a burger and chips or to grab fish and chips from the chippie would make feeding the family one less headache to deal with at the end of a busy day. I don’t think the children have ever really felt like they’re deprived in this area, especially as there were occasions before allergies became a big deal or we’d ever even heard of EGID that we would treat them whilst on holiday;

but there have been a couple of events recently where M has really struggled with not being able to eat on the go like so much of the rest of the world.

The first was back in July, he went to a friend’s paint-balling birthday party, which was followed by lunch and birthday cake at the local McDonald’s. M was brilliant. He was keen to join in and spend the time with all his friends and asked me to take along some safe food for his lunch. He sat with them whilst they enjoyed their Happy Meals and asked his friend’s Dad if he could have a small portion of fries to smell at the same time. This may sound strange and it’s most definitely heartbreaking to see, but is a coping mechanism he picked up from a couple of the amazing children we met during his GOSH stay last year. It is widely reported that if you lose one of your senses, the others become more acute to replace it and it is this theory that has been put into practice here. M may not be able to eat many of his favourite foods any more, but he can still garner great satisfaction from enjoying their distinctive smells instead. When you consider that your sense of taste is hugely influenced by your sense of smell, after all we all know how bland food can seem when we’re struggling with a heavy head cold, then I guess that it’s no wonder that M finds such enjoyment from smelling what he can’t eat.

With the party behind us, the issue of fast food didn’t raise its head again until just a few weeks ago following a family evening out at a local art exhibition. I had managed to feed G and M before we headed out the door, but Mike and I, no strangers to late night meals, decided that the timing was such that we could only grab something on our way back home. We stopped to quickly pick up burgers and almost instantly both children went into minor melt-downs. I knew that a lot of their complaints were the result of the late night and a desperate need to get to bed and sympathised with their frustrations at not being able to eat something, anything “normal” for a change. I put my thinking cap on and determined to create a meal that could somehow replace the humble burger in our household and give the children the taste sensation they were craving. 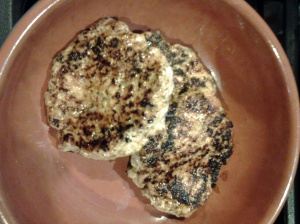 I remembered that a couple of summers ago, I had created a fantastically tasty lamb and mint burger recipe and I wondered if I could take that basic recipe and tweak it to meet M’s new dietary needs.

The great news is that I absolutely could. We buy our fresh meat, fruit and vegetables from a local co-operative and one of the ingredients I had spotted before was minced chicken. Adding a mix of seasonings and herbs as well as a generous helping of golden syrup, I prepared some great tasting chicken burgers. I whipped up a batch of rice flour pancakes to replace the bread roll for M, though we’ve decided that my flatbreads would work equally well. They were declared an almost instant success by both M and G, who have asked for them on more than one occasion since. Even better, I discovered that I could use the same recipe to create mini meatballs, which M enjoyed with rice pasta drizzled with a little rapeseed oil, some diced cucumber and a handful of additional herbs. So, one simple recipe led to 2 great new meals for my now slightly-less-moody children – a job well done!