Given the morning had been spent tramping across the length and breadth of London, you can only imagine how delighted M and G were to eventually reach our final destination – One Aldwych Hotel. Ever since I had settled on taking my Mum to the Royal Opera House as part of her 70th birthday celebrations, I knew that I wanted to find somewhere for an afternoon tea which could cater for both children as well as the adults.

Our last afternoon tea in London was over 16 years ago when I qualified as an accountant and treated the family to tea at the Ritz, all whilst pregnant with G. It was an amazing occasion and I really wanted to find somewhere to meet our expectations and previous experience if at all possible.

I spent weeks searching the internet and reading reviews before finally settling on the Charlie and the Chocolate Factory afternoon tea offered at One Aldwych. I already knew a little about One Aldwych as Executive Chef Dominic Teague won the inaugural Pathfinder Award at the FreeFrom Eating Out Awards in 2016 and I had read all about the work he had done to create a completely gluten- and dairy-free restaurant without advertising the fact.

Our experience started with my initial contact with the hotel to see if they could cater for both G and M without too many problems. There then followed a flurry of emails between us to establish what safe foods could be prepared, keeping it relatively simple to suit G’s tastes and 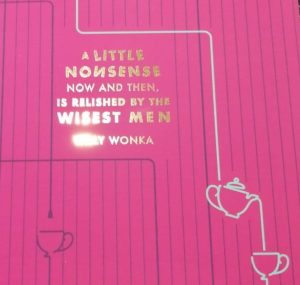 without pushing M’s boundaries too far. I asked for his meal to be MEWS-free and was impressed when they sent through to me a copy menu for what they thought they could make for both children. With a few tweaks here and there, we ended up with what looked to be an impressive selection of savoury and sweet treats, guaranteed to make this afternoon tea a truly special one for us all.

With one week left to go, there was just enough time to exchange one last email before we headed to London and I was able to order a MEWS-free celebration cake to mark the triple occasion – Mum’s 70th, G’s 16th and our 20th wedding anniversary – all in one fell swoop. I had also received a reassuring email from Executive Chef, Dominic Teague himself, explaining just how they would look after our table and take care to make sure the cross-contamination risks were reduced to as low as they possibly could be. Other than making sure that we had enough medicines with us to ensure that M was well-covered for the extra treats I knew he’d be trying, there was nothing more we could do until we arrived at One Aldwych itself.

On arrival, we were ushered upstairs to the beautiful dining space of One Indigo and quickly seated at our table. My one criticism of our afternoon is that service seemed to take a long time from beginning to end and we had been sitting at our table for a good 5 minutes before the restaurant manager appeared to introduce himself and tell us about what food we could expect to be served. However, everything settled, we then sat back to wait for our food to appear – and that was definitely worth the wait.

My one hesitation had been around the savoury items going to be served for G as she is not the most adventurous when it comes to food and although I had originally asked if she could have just plain GF/DF ham sandwiches, the final menu I had seen suggested that she would be given more than that. A little prompting ahead of time meant I’d agreed with her that she would try at least a mouthful of everything she was served, so you can imagine all our delight when a plate of safe ham sandwiches appeared for her as well as an allergy-friendly carrot puree and houmous tart, all of which she enjoyed with an enthusiasm just about matched by M as he enjoyed an incredible array of unexpectedly safe foods.

The pièce de résistance was, without question, the marvellous dessert selection that arrived for each of us. Cakes, scones, mousse and fruit kebabs made for a truly spectacular display and the selection provided for M was just as impressive as those for the rest of the table. The chocolate and raspberry celebration cake was wonderfully light, airy and delicious, though totally unnecessary given the amount of food we had to enjoy for the meal. My Mum, Mike and I were all delighted to be able to treat both children in such a way and one that we would never have thought was possible 4 or 5 years ago. My thanks go to Dominic Teague and his team at One Aldwych for giving us such a wonderful birthday meal – and for the boxes of leftovers we were able to take to enjoy at home later too! 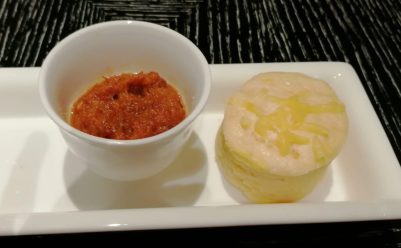 1 thought on “Charlie & the Chocolate Factory Afternoon Tea, One Aldwych”