After our late night at the Royal Opera House, you couldn’t have blamed us if we’d enjoyed a lie-in the following morning; however, always something of a glutton for punishment, I decided that we needed some exercise before we headed to the second part of my Mum’s birthday treat, the Charlie & the Chocolate Factory Afternoon Tea at One Aldwych, 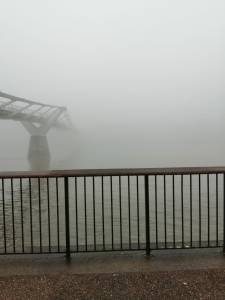 and so we set off from the hotel by about 9.15am. Suitcases packed and left at the hotel for pick-up before our train home, we set off along the South Bank towards Westminster bearing little more than handbags and the requisite medications needed for our meal.

It was an extremely foggy Sunday morning and whilst it wasn’t quite thick enough to classify as a traditional “pea-souper”, we could barely see to the middle of the murky Thames, something neither child had experienced on previous visits to London. We meandered past the Globe and had a quick look to see what productions are coming up as both G and M are keen to return to watch an outdoor Shakespeare play as soon as we reasonably can. It’s been a long time since any of us have walked the length of the South Bank and it was interesting to take note of the various developments that have happened in the meantime. As soon as we reached the London Eye, it was time to turn right across Westminster bridge, past

the still scaffolding-clad Elizabeth Tower, home to Big Ben, and into Parliament Square to look at the parlimentarian statutes that can be found there.

As the only ones to have eaten breakfast at this point were M and G, our next decision was to head to Trafalgar Square and the wonderful Cafe in the Crypt at St-Martin-in-the-Fields for a small meal to tide us over until our Afternoon tea for lunch. Our journey took us past the Cenotaph, which still had the poppy wreaths from the Remembrance Day service displayed and we took 10 minutes or so to look at all the different wreaths we could see. Unfortunately, when we eventually reached the Crypt cafe it wasn’t yet open and so instead we decided to try out the recently refurbished cafe 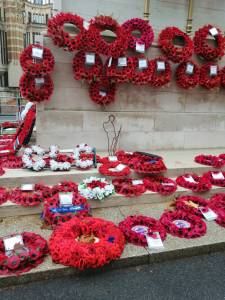 in the National Gallery.

Our experience at the National Gallery cafe was very much a mixed affair. On one hand they stocked both soya and coconut milk, which meant that both G and M could have a hot chocolate, something that was very much needed on that cold November morning. However, there were no allergy options for breakfast items or cakes and instead the children were left munching on some plain crisps and a couple of snacks I had tucked into my bag. Given we were ultimately en route to our afternoon tea, it didn’t matter too much on this occasion, but it would have been a much bigger problem on any other visit.

Once our appetites were satisfied enough to see us through to lunch, we had just enough time to browse the Christmas market in Trafalgar Square. The children enjoyed having a wander to see what was there and we came away with a new pair of gloves and a set of small hand-warming pads for M. Despite browsing several stalls, G was left disappointed that she still hasn’t been able to find a ring that’s a perfect fit for her fingers, but we will continue the search whenever and wherever possible. Finally it was time to head on to One Aldwych and the treat we were all hoping their Afternoon tea would prove to be.

1 thought on “A Sunday in London”