That was G’s description of the amazing Borough 22 doughnuts that I brought back for her from my stint as a judge at the Free From Food Awards 2016 at the beginning of February. I had been impressed with the quality of these delicious allergy-friendly treats when I’d tasted them during the Tea-time treats category of the awards and was delighted to find that my somewhat fussy 12 year-old was showing a similar enthusiasm as soon as the first bite entered her mouth. She’s not usually given to waxing lyrical about anything, so these words constituted high praise indeed and the only disappointment was the look on M’s face which he just couldn’t hide, even whilst masterfully trying to celebrate his sister’s excitement with her. It was at that point a tiny seed of inspiration started to sprout and I soon had a cunning plan up my sleeve which I was determined to pull off if at all possible.

My hope was based on the comprehensive ingredients list found on Borough 22’s website and these promising words “We use the following ingredients which, where possible, can be substituted if you have an intolerance to them or are vegan/ vegetarian/ lifestyle conscious…if there are any that don’t agree with you then please let us know. Because we bake to order in small batches we will try our very best to substitute it for something that you can have!” Hardly pausing for breath and most definitely with every part of my body tightly crossly, I penned a quick email to ask if there was any possibility of a doughnut recipe that would cater for M’s particular and restrictive food requirements, stressing that I completely understood that this might be a challenge too far. I included my review from the #FFFA16, told them just how thrilled G had been to taste their doughnuts and then sat back to nervously wait a response. The return email, when it came, led to a lengthy phone-call, a flurry of e-mails and the development of what is rapidly growing into a great new friendship. 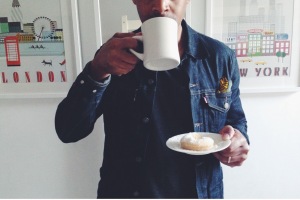 Ryan Panchoo, owner of Borough 22, is a truly inspirational man, who had a vision and didn’t just make it a reality for himself and his family, but chose to share it with the greater food allergy community too. It all started with the observations of his food-allergic wife and children that restaurant desserts were usually fruit or sorbet and lacking in quality and imagination, and the dream to create one dessert for everyone; something that tasted great, was of a great quality and that initially was both gluten- and dairy-free. He started with chocolate brownies, created a recipe that received the thumbs-up from family and friends alike and could then quite easily have stopped there. However, in a move that I feel really reflects his determined nature, Ryan decided to experiment with doughnuts and despite never having baked one before in his life, researched and tweaked recipes until his multiple allergen-friendly and delicious treat was perfected.

Ryan tells me that his ambition was never to sell his brownies or doughnuts, instead he simply wanted to be able to enjoy safe sweet treats at home with his family; but his friends had a different idea and in October 2014, Borough 22 was launched. It really is in the tradition of the very best “rags-to-riches” fairy stories to learn that he has never invested millions in some snazzy marketing campaign, instead depending on personal recommendations and his use of social media to spread the word. 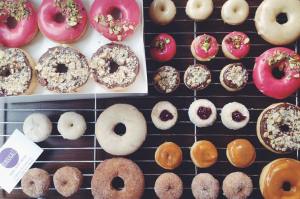 His colourful and eye-catching Instagram photographs led to a situation that he willingly admits was surreal, when he found himself sitting in a meeting with a buyer for Selfridges, discussing exactly what he needed to do to sell in their prestigious food hall and, even more impressively, how they could help him achieve it.

Nearly 18 months on, Borough 22 is a flourishing business, who sells its wares in several outlets in South East London (The Plumstead Pantry & Good Food Catford) as well as through mail-order via their website. The business with Selfridges is currently on hold as Ryan searches for a suitable manufacturing partner to help him meet demand as he still works full-time as a Project Manager for a property investment company. Once that trickiest of partnerships is settled, the plan is to return to Selfridges and hopefully develop the business even further. 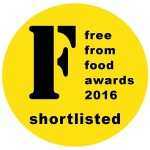 I’m delighted to be able to share that Borough 22 was also shortlisted in both the “Teatime!” and “Start ups and Small Producers” categories of the #FFFA16, although everyone, Ryan included, will have to wait until the awards ceremony in late April to find out just how well they did. To shortlist once is impressive, twice simply astonishing, but I’m honestly not surprised as this is a product we are more than happy to endorse and recommend to everyone, food allergies or not.

Even better news for the 7Y2D household’s youngest member at least, Ryan agreed to try his best to adapt his recipe and accommodate M’s complicated food allergies. I decided not to mention our plans to M or G until I knew whether it was a possibility or not and even on the day I took delivery, kept quiet until the doughnuts were safely in my hands. However, as those who know me will attest, my excitement on that Friday was impossible to hide and I spent the day counting down the hours until I could pick my pair up from their respective schools and share the news. I captured every precious moment of the “big reveal” not just for posterity’s sake, or for my blog, but most importantly to share with Ryan himself: 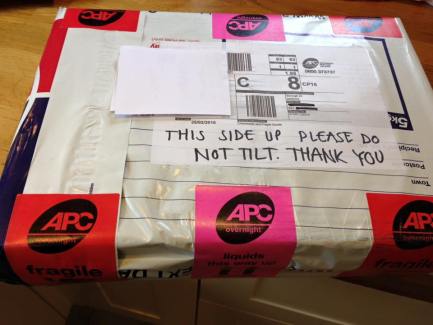 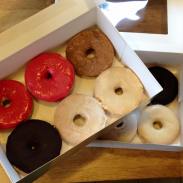 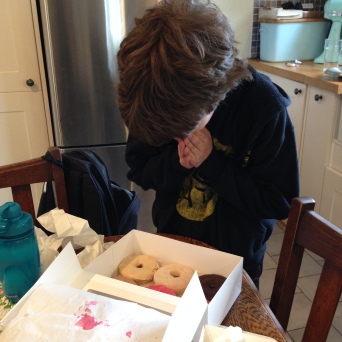 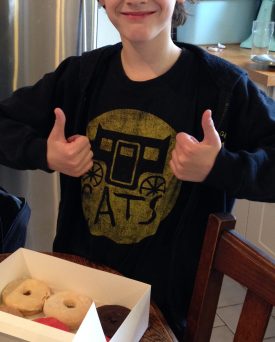 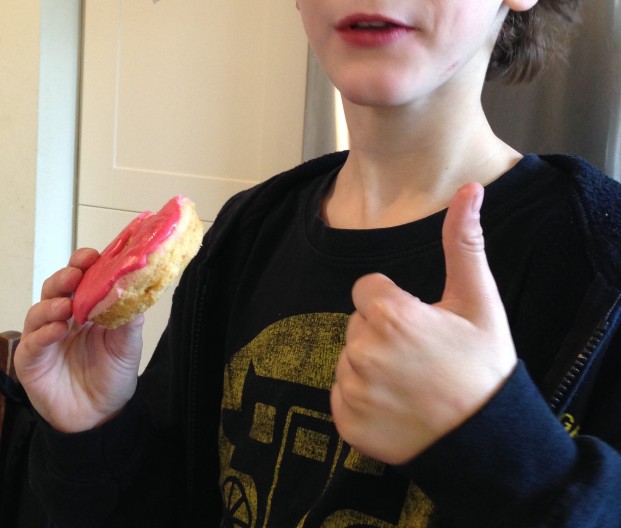 I’m not sure that you really need my words to tell you about M’s response as these photos pretty much capture it all. I will tell you that M was left speechless and in tears when he realised these doughnuts were for him. I will confess that as he squeezed me tight and desperately sought to compose himself, I had to swallow down the huge lump in my own throat and wipe away a few stray, but happy tears. I will gladly share M’s own endorsement that Ryan can “…succeed at whatever he bakes Mum, because these doughnuts are almost better than birthdays..!”

Ryan, you may be a full-time project manager by day, but in my little allergy-sufferer’s eyes, you’re a true superhero by night.

8 thoughts on ““Little pockets of heaven””