And just like that it’s the end of the school year and the end of G’s secondary school career. From September she’ll have moved to the heady heights of further education here in the UK, although she’s still not decided as to exactly what she’ll be studying or where. It’s been an odd culmination of the last few years of hard work and has left us all feeling a little discombobulated. It’s not quite the end of the 7Y2D home-school as I have already warned both M and G that I fully expect them to keep up with some studies over the coming weeks and M has already been set some tasks by school to challenge him in preparation for his GCSE courses that will soon be starting. 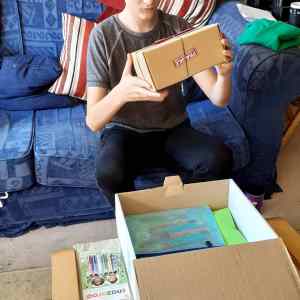 They do have some fun activities planned for the summer too, with both children being invited to join Over The Wall’s “Camp in the Cloud”, something they’re both excited about as this photo of M opening his box shows. We will also no doubt take advantage of the freedom of more movement by embarking on a few hand-picked and carefully chosen day trips starting and ending at home. Our plans for a summer extravaganza to celebrate the end of G’s GCSEs have been put on hold for the foreseeable, but we will make sure that her results day is still marked in style. Truthfully it’s not the summer we had planned, but then 2020 hasn’t really been the year we were expecting it to be either. One thing’s for certain, this is a year unlike any other and we’ve all experienced life in a new way in the last 17 or so weeks.

Of course, despite rumours suggesting otherwise, our week in Cornwall did not purely revolve around places to eat and we had an amazing time exploring many of the beautiful nooks and crannies the county has to offer. This wasn’t a week for sitting on a beach relaxing as instead we crammed as many day trips in as we possibly could and spent a lot of time making some marvellous, magical memories. Just as I gave you a quick taster of the many restaurants we were lucky enough to enjoy, here is my overview of some of the best places we visited and the adventures we had during our stay:

Fowey River Trips – having arrived in Fowey in time for lunch and enjoying a great meal at the Galleon Inn overlooking the river,

M begged for us to take a boat trip from Fowey harbour, which sailed us past such treasures as Daphne DuMaurier’s house before heading back towards the mouth of the estuary. It was a wonderful way to see a little of the area we were visiting before our week really started and we were able to enjoy the last races of the Fowey Royal Regatta from the water too. Both M and G enjoyed the trip, which was an amazing first as M usually needs coaxing onto anything smaller than a transatlantic cruise liner! They were quick and eager to ask questions of the skipper and we were lucky enough to share the boat with some locals, who were happy and keen to explain more about what we were seeing as well as pointing out many of the birds to be spotted along the river’s edge.

Eden Project – this was M’s choice for a day out and despite our disappointment at the food offerings available and the inevitable rainy start, all in all we had a wonderful day. This wasn’t our first trip to the Project and it was fascinating to see how the environment had developed since the last time 5 years ago. The children loved spotting the different plants they knew in the biomes and M took particular pleasure in b

eing photographed next to the rice. This summer, the Eden Project was also home to the Dinosaur Uproar, which meant there was lots for G and M to do whilst we were there. They enjoyed the puppetry displays, though both were a little nervous of the giant dragonflies when they first took flight nearby! Sadly, the wait to climb up to the Nest platform for a bird’s-eye view of the Rainforest biome was just too long for us to endure, but we did enjoy the Rainforest canopy walkway, which gave us a taste of what you could see from the very top and at least it leaves us with a good reason to go back and visit another time.

St Ives – G’s pick for the holiday was to visit an art gallery and what better place to go than the Tate St Ives? Thanks to a top tip from my ever-trusty hairdresser, I was also keen to take a peek at the fascinating sculptures at the Barbara Hepworth Museum and thought it might provoke some interest in both G and M too. We parked at the fantastic Lelant Saltings park and ride to travel into St Ives via train and not bus as we’re more used to doing in our home town. The Tate St Ives had organised a children’s art trail between the Barbara Hepworth house and the Tate itself, which asked them to identify 12 pieces of art from the partial images given and note down the artist, the name of the artwork and where they had spotted it. Two pieces were taken from the route between the two sites and provided a great opportunity to explore the art on display at each. Having found 11 of the 12 works, we stopped for G and M to take part in the creative workshop, which asked them to create sea-themed art of their own in clay. 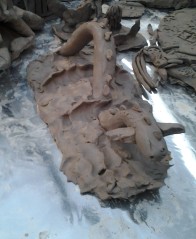 We must have spent a good hour there as their creative juices flowed and they created stories behind what they had made to share with the volunteers running the workshop. G recreated her pinch-pot “werefish” she had first made during the first week of the summer holidays and M gave his interpretation of a sea serpent – “…but it’s not Nessie Mummy…” I’m still not convinced I’m a fan of modern art – give me the National Gallery any day – but it was a great way for the kids to access it and start to develop their own opinions.

St Michael’s Mount – in what now feels like a lifetime ago, I sang with my cathedral choir at the awe-inspiring St Michael’s Mount and have fond, though somewhat vague memories of that whole trip. It is a place that none of the rest of the family had been to and so was the perfect place to go back and visit whilst in the area, so to speak.

M was fascinated by the nature of the local tides, which means that the Mount is accessible by foot for part of the day and by boat for the rest of it and was desperate to experience both – a wish that was easy to fulfil. We arrived at the Marazion car-park fairly early and were thrilled to be able to walk across the sands and then the causeway to the Mount. The children were curious about how the tides would cause the walkway to disappear later in the day and keen to see it happen.

We started our visit at the Castle, having spotted the Giant’s heart stone on our way up the steep and rocky path. The views from the top were amazing and we discussed how difficult it would have been for anyone to successfully scale the rocks to attack. Inside the castle itself, G and M decided to attempt the quiz and were interested in talking to the numerous guides dotted around the rooms to find out more about what we could see on display. M was particularly taken by the story of the 7-foot man banished from the mainland, who took refuge with the monks and is now convinced that

he is the “truth” behind the story of the giant, which we later heard told by the storyteller in the grounds. Before we headed back down to the beautiful gardens, we watched from the top as the waters began to cover the walkway and commented on those brave few who were still venturing across by foot. G and M could easily have spent hours exploring the gardens surrounding the castle as they clambered up and down the winding, narrow pathways and stairs that led to nowhere. The WWII pill boxes that surrounded the coastline also captured their attention and our day there turned into an unexpectedly educational trip! We returned back to the mainland by boat at the end of the day, tired out, but delighted by our decision to visit.

The Lost Gardens of Heligan – our final day in Cornwall was spent exploring the Lost Gardens of Heligan, uncharted territory for us all and Mike’s fine choice for our adventures. I found the history and story behind the Heligan gardens really interesting and you can read more about it here. Yet again, we were thrilled to find a whole host of children’s activities available and started with the sculpture trail that led us past the stunning 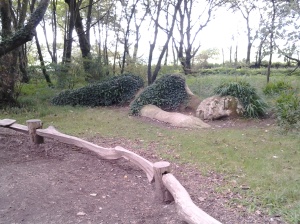 Giant’s Head, the sleeping Mud Maiden and the ghostly Grey Lady. Pausing briefly for lunch, G and M then enjoyed time in the hammocks that had been strung between the trees before coaxing Mike and I into helping them build a den in the woods from the vast supplies available to use. They were understandably proud of the den they designed and worked on together and were disappointed to have to take it apart before we headed on to the next section.

Having dismantled and returned the building equipment, and having even enjoyed a toasted marshmallow or two courtesy of M, we wound our way through the “jungle” towards the Burma rope bridge. I wasn’t quite brave enough to stop halfway across to take photos of my intrepid duo who were following close in my footsteps as I was too worried about dropping my faithful tablet into the depths below, but was impressed that neither child was phased about crossing the jungle floor which was a 100 feet beneath them! We finished our day by the Steward’s house, enjoying the rope swing and traditional garden games that were on offer.

As you can tell, we had the most amazing week away from home, experiencing just some of the Cornish treasures that are on offer. In M’s words, “…it was almost as good as Portugal…” and he’s already clamouring for a return visit next year.