As many of the regular readers of my blog will know, there is nothing we love more as a family than a night out together, mostly at the theatre, though a trip to the cinema comes in a close second, especially when there’s a meal out involved too. We may be *only* 4 weeks into our COVID-19 lockdown, but there is already a small number of shows that have been missed: “A Christmas Carol” and “Macbeth” to help with G’s GCSE English Literature revision as well as the Christmas present we’d all been very much looking forward to, “Pentatonix” at the Apollo Eventim Hammersmith at the start of April.

The entertainment industry as a whole is making a huge effort to continue doing what they do best and are giving the general public the unprecedented opportunity to access a huge number of plays, musicals and even mini concerts through various social media platforms and I thought I’d share some of my favourite ones with you:

Gary Barlow’s #thecroonersessions: I have absolutely loved these sessions on Facebook, which see him performing some big hits with some big name stars and I would, without a doubt, recommend them to anyone looking for some great music to listen to. I’d be hard-pressed to pick a favourite, but his sessions with Ronan Keating, Alfie Boe and Matthew Morrison are definitely in my top ten. 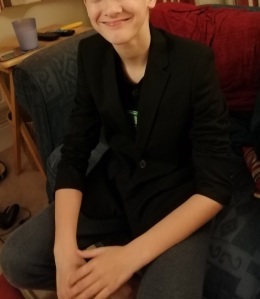 The Shows Must Go On!: Thanks to Andrew Lloyd Webber’s new YouTube channel, we’ve been able to spend Saturday nights at the theatre to enjoy a musical. It kicked off with “Joseph and His Amazing Technicolor Dreamcoat”, which had us all singing along without worry about what the people in neighbouring seats might think. M dressed up for the occasion in his best suit jacket with pyjama trousers and we even squeezed in an interval ice-cream halfway through the show. Unfortunately we just missed out on seeing the arena tour recording of “Jesus Christ Superstar” last weekend, but are definitely looking forward to “The Phantom of the Opera” this Saturday night. These shows are available on YouTube from 7pm on Friday evening for 48 hours and are announced weekly.

Disney+ Channel: Like thousands of others across the UK, and probably the world, we have signed up for a year’s subscription to the Disney+ channel, which has given us access to all things Disney as well as some unexpected extras such as the National Geographic channel. We have designated a “Disney” day each weekend, where a selection of Disney films are chosen to be watched, or in many cases, re-watched. So far we’ve enjoyed all 3 “High School Musical” films, the “Pirates of the Caribbean” saga and some more traditional animated films including “Moana”, “Hercules” and “The Little Mermaid”. It has also allowed both children to revisit some of their favourite Marvel movies over lunch after a morning of school work is completed.

Virtual Quiz Nights: this is not something we normally do, but what started as a fun way for G and I to spend some time with our heads together on a Friday evening has now morphed into a riotous event for the whole family. We kicked off with the “Friends” quiz a couple of weeks ago,

were infinitely more successful at the Disney quiz in the second week and are now reading up in preparation for tomorrow’s “Harry Potter” quiz, a topic that I’m hoping my daughter will excel in as it’s definitely not part of my wheelhouse. It’s been fascinating to see who knows the most about the different quiz rounds – who could have imagined that M would have a seemingly faultless knowledge about what years Disney films were released as he managed an almost perfect score.

What have been your alternatives to nights out whilst in quarantine? Have you become an avid watcher of the wonderful productions of the National Theatre, or have you found something else to do? Please share!