I’ve made no secret of the fact that the Hard Rock Café is not only a firm favourite when it comes to choosing somewhere safe and delicious for the family to eat, but is also now something of a tradition with one of the children, almost always M, asking whether there’s a branch for us to visit whenever we go somewhere new, no matter where in the world we are. Believe it or not, it is also a question raised when we investigate holiday destinations, though it has not yet dictated our final vacation decision. I fully accept that I am to blame for my children’s obsession with going to as many HRC locations as we possibly can and the collection of their “City tees” carefully stored under my bed is testimony to just how long my love affair with HRC has been going on.

Given all of that, it does seem odd that despite our very many weeks spent in London, that until our most recent visit, we had never visited the flagship restaurant before. Well, to be more accurate, I had been there many years ago, but hadn’t taken either Mike or the kids there when looking for somewhere to eat out. So, we decided to make the original restaurant our final pitstop before heading back to the station to catch our train home. We arrived a little later than originally planned due to some confusion over where exactly we needed to go as there have been 2 further locations opened in London over the last few years. 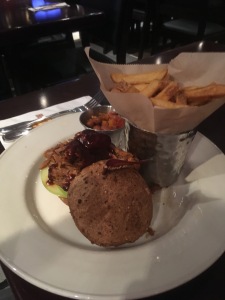 Despite our initial false start and unexpected visit to their Piccadilly branch – and deciding that that is somewhere we will definitely go back to eat another time – we eventually reached Mayfair in one piece and after a somewhat lengthy wait, finally sat down to enjoy our dinner.

We actually began our visit there with a short trip to “The Vault”, a small museum holding some of the rock paraphernalia that they don’t currently have on display in the main restaurant, before we ordered our food. It occupied a few minutes, but wasn’t as interesting, or vast, as we were hoping it might be. G and M already knew what they wanted to eat and opted for the GF pulled pork sandwiches with fries which have become a firm favourite with them both. The service was as excellent as ever and we were impressed with how quickly the food arrived with us despite our somewhat lengthy wait.

What we weren’t anticipating was a visit to another UK HRC location just 2 weeks later during our Manchester adventures. This unexpected surprise was thanks to the eagle eyes of M, who, despite being told by me that I thought the Manchester branch has closed down in the time between my university years and today, spotted it on the Google map as we were planning our walking route from the IWM North to the escape rooms. Just as in London, it was the perfect ending to our weekend there and they devoured their meals with an enthusiasm no doubt stoked by their time skydiving. M decided that this time he’d venture away from the pulled pork and instead ordered a GF legendary burger, which he proclaimed to be just as delicious as he hoped.

Two great locations, two sets of excellent service and two fantastic lunches. Would we recommend? Absolutely and I can’t wait to see which Hard Rock Café we’ll discover next!