When the email inviting me to once again participate as a judge of this year’s Free From Food Awards dropped into my inbox a couple of months ago, I started the necessary planning to ensure I could get to London and be away from home for a couple of days. Mike was booked to work from home for my 2 days of judging, I arranged for a bed at the FFFA headquarters and my annual leave was booked from work. It seemed as if everything had been meticulously planned and since the start of the year, I’ve been counting down excitedly to the days themselves. Needless to say, and just in case you hadn’t picked up from the tone of my above writing, things didn’t quite go as expected and life once again proved that even the best laid plans can go awry.

First of all, my arrangements to go the night before my first day of judging had to be tweaked when Mike was due to be working over 2 hours away and wouldn’t be home before 7pm that evening. The thought of the 2 hour train journey late at night and then travelling on to the FFFA house with the likelihood that I wouldn’t arrive much before 10.30pm that night meant that instead I had a quick rethink and booked myself on to the 6am train the following morning. With the tickets booked, it looked like everything was back on track and it was full steam ahead once again.

And then ‘flu struck; and with 50% of the household taking to their beds, I suddenly had to rethink it all. I was reluctant to give up my third year of judging completely and so reached an agreement with my husband in his sick-bed that I would head off on the 6am train as planned, but instead of having some time to myself and staying in London, I would instead return at the end of the day and pick up my nursing duties where they had been left off over 12 hours before. It would mean a long day for me with not much chance to rest and recover, but I knew that the day itself would rejuvenate me as I spent it with the fantastic bunch of fellow judges that have become friends over the last couple of years.

My choice of category this was “store cupboard”, something I hadn’t previously judged and one that I had found quite intriguing in previous years. This category encapsulates a vast selection of products that could be found in your kitchen cupboard (flours and packet mixes), fridges (mayonnaises and sauces) or freezers (cook from frozen goodies). With 49 items to taste, evaluate and score, this is a long day, which contained a lot of laughter thanks to the people I was with. I’ve made no secret that the last 12 months at work have been challenging ones and it proved to be a real reminder of exactly what is important in life and provided a focus on just how lucky I am to have such opportunities away from the 9-5 drudgery of the day-to-day.

There were a lot of products for us to try and some were definitely better than others. I think it fair to also state that some were better received than others, with the occasional one leaving us all scratching our heads as to why exactly they’d been entered into the awards. With a choice of 49 different items to taste during the day, I wanted to bring you the highlights as I saw them and although not all were safe for M, they would all be an ideal addition for G. In no particular order, I loved these: 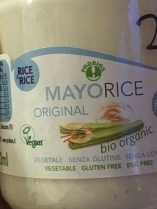 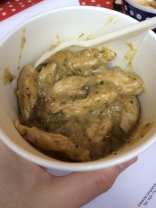 Orman’s Vegan Easy Egg – a fantastic egg replacement product that produced an omelette that not only tasted just like the real thing, but had a similar texture as well. I hadn’t come across this before, but I absolutely loved it.

Probios Mayorice – a rice-based mayonnaise that was a good alternative for regular egg mayonnaise and, even better, was pretty much M-friendly (allowing for the fact that we have no idea whether he can tolerate mustard or not!).

Thai Green Curry sauce – I can’t remember who this was made by (Co-op maybe?), but it was a delicious and aromatic version of this popular Thai dish. Marketed as gluten-free, but sadly not also dairy-free as the manufacturers had decided to use double cream to thicken the sauce. Despite that fact, I enjoyed the mouthful I had.

Spice Sanctuary’s GF Asafoetida – This is one I’d never heard of, but is a fantastic gently aromatic spice blend that can be used to replace onion and garlic in your cooking. Not an inexpensive option, but you only need a little to flavour your dishes.

I once again had a fab day finding new products and taking some great options away with me to experiment with at home. Judging finishes this week and the results will be announced at the Awards ceremony in a couple of months’ time.

5 thoughts on “Third year a charm”