When you hear about bullying, what does it make you think of? Does it bring back bad memories of your time at school?

According to research carried out in 2016 by one of the largest anti-bullying charities in the world, Ditch the Label, between 50 and 60% of young people aged between 12 and 20 in the UK will have experienced some form of bullying in the last year. That, to me, is a frighteningly large percentage, especially knowing that both G and M form part of those statistics; and so do I. Any child who has experienced bullying hopes that it will end when they have new friends, or find themselves in a new class, or when their time at that particular school draws to a close. You also assume that once you’ve grown up and have left education behind you, the bullying will stop, but sadly that’s not always the case. The statistics regarding workplace bullying are much harder to pinpoint, but a Forbes survey in the USA suggested that up to 75% of workers are affected by bullying and a 2015 ACAS study here in the UK revealed the undeniable truth that workplace bullying is on the increase and that many people are too afraid to talk about it.

Having struggled with bullying throughout my school years, I never dreamed that I might experience it again in adulthood and when I came up against workplace bullying the first time, it took me a while to realise and acknowledge it and then to find the courage to deal with it. M had just been born and, due to the difficulties of my pregnancy and his subsequent early arrival, I wanted to work closer to home, finding what seemed to be the perfect job in a small accountancy practice almost literally across the road from where we lived. Unfortunately, the reality of being verbally belittled and my capability as an accountant questioned in front of my colleagues on a daily basis was destructive and I 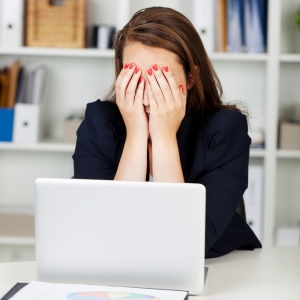 eventually found myself seeking to escape that unhealthy work environment. It was only at the point of handing in my notice that I felt able to be honest with my boss about his bullying behaviour and whilst he was apologetic as he hadn’t realised his words were so damaging, that work relationship had been destroyed and I needed to move on.

I’ve been lucky since then to find myself in jobs working with some truly lovely people, who have been there to build me back up and consequently I have seen my confidence and self-belief soar. Despite what people might think, I am naturally an introvert and am most definitely not a fan of confrontation, but I’ve learned to stand my ground, speak out for myself and defend not just my decisions, but also those of my children and my colleagues. That shy, insecure little girl who wouldn’t say boo to goose still hides inside, but I’ve discovered a strength to speak up and speak out even in situations where my more natural instinct would be to run away and hide, hoping that someone else would be the one to voice their opinions.

Which is why it’s so difficult to believe that in the past year, I have found myself a victim of workplace bullying once again and in a position where it has been much more difficult to address than I could ever imagine. Sly comments questioning the professional ability of both me and my staff, carefully cloaked in phrases that could be excused away as being mis-construed by the individual they were aimed at as well as more blatant challenges of my financial decisions for the business in management meetings that have been ignored by our Executive Director have become an unavoidable part of my working week. Added to that is the deliberate exclusion of me and my team members from a number of workplace events and meetings, some far more significant than others.

Exclusion is, without a doubt, one of the hardest types of bullying to deal with and whether I’m my insecure 12-year-old self or a more confident version at 40, it still eats away at what little self-belief I’ve managed to hold on to over the years.

These behaviours have left me struggling to be my usual positive and sunny self in the office, as inside I’ve been slowly crumbling to pieces. I do have a tendency to believe the very best of people, so it’s no surprise that initially I genuinely didn’t think this was a deliberate attempt to whittle away my self-esteem. The gradual realisation that nearly all of these actions have been carried out intentionally, although I still wholeheartedly think that they are reflective of the individual’s own insecurities and a need to defend her role in the business, means that I have distanced myself as much as I possibly can and will not leave myself vulnerable if at all possible.

Of course, my response now is far different to what it was as a child and yet the effects of those experiences are the same. I have been left feeling ignored, belittled and unappreciated and the deliberate decision by my direct line manager to whitewash over what is going on and excuse the behaviour of this bully as being stress-related has naturally impacted on the ongoing working relationship I have with both him and this workplace bully. I feel as if my concerns have been deemed ridiculous, unimportant and as an over-sensitive reaction on my part, which leaves me questioning just how long I can reasonably remain in this post. Unbelievably our workplace policy on bullying requires that “….Initially a member of staff should request that the bully should stop, explaining how it makes them feel either face-to-face or by writing a personal letter or email…“, something I honestly believe no-one being bullied would be able to do, especially when the most senior members of management so blatantly excuse and support the bully along the way.  It takes unbelievable courage to be able to talk openly and honestly about how you’re feeling about decisions being taken in the workplace and, in my opinion, remarkable cowardice on the part of management to dismiss what’s being said as an irrational response.

I don’t know what the next 12 months will bring when it comes to my career, but finding the courage to speak out both in the workplace and on my blog has empowered me more than I ever thought possible. Workplace bullying is real and we should never forget or ignore that truth.