It may only be the second week of January, but Christmas already feels like a lifetime ago and the memories are already fading fast. December was yet again an interesting month for our family and whilst we had irrefutable success at keeping M out of hospital, we had enough other medical crises to more than meet our quota for the year. As I have already shared, December started with a huge scare about my remaining sight when I was incorrectly told that I needed urgent laser surgery to sort out the developing diabetic retinopathy in my right eye. The hugely positive outcome that in fact the diagnosis was wrong and no treatment was required was a massive relief, but those first 2 weeks of Christmas planning were overshadowed by the frightening threat of surgery that loomed over the household.

Our medical dramas didn’t stop there. Mike took a tumble from his bike back in October when he was cycling to our local train station on his way to work and has been complaining of severe pain in his left shoulder ever since. The initial thoughts were that he may have torn his rotator cuff and so was referred onto a physiotherapist who, as well as recommending a heady combination of co-codamol and naproxen to ease the inflammation and pain, made his own referral for an MRI to be done as soon as possible. Mike had that MRI at the start of December and by the middle of the month had received a letter stating that it looked like he had a possible “avulsion fracture of the greater tuberosity of the humerus“, but that it would need to be reviewed by a consultant to confirm diagnosis. That diagnosis has now been confirmed and further complicated by the onset of frozen shoulder, a common occurrence following this type of injury. Last week Mike was treated with a cortisone injection and is already beginning to feel some of the symptoms beginning to ease a little, though we have been told it could take a number of months for his shoulder to recover completely. He struggled with taking the co-codamol and a switch to Tramadol has helped massively there. Unfortunately, despite skipping a dose of the Tramadol so that he could enjoy a glass of something with Christmas lunch, the alcohol and painkiller combination didn’t really work and he spent a lot of Christmas Day asleep, which didn’t go down well with most of my family!

As for M, well he was looking forward to celebrating his big sister’s birthday at home with her for the first time in 3 years as well as taking part in all of the end-of-term Christmas activities being held at school. Unfortunately, once again his health took a nosedive as he came down with both ‘flu and tonsillitis during that last week and was really quite poorly for a few days. We knew he wasn’t well when he decided not to go to our local pantomime with us and instead stayed at home and in bed with my Mum for the evening. The necessary course of antibiotics took their toll on his system and we found ourselves taking a few steps back from our hard-won gains from the last few months. M has gone back to school recovered to generally good health and eager for the term ahead. 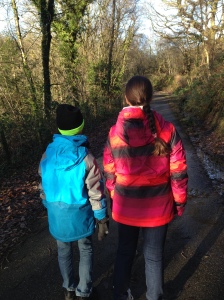 Despite these small hiccups to keep us on our toes, we celebrated the festive period in style. Christmas was spent with my family down in South Wales, where we were able to enjoy a refreshing walk around the nearby reservoir in fine Boxing Day tradition. Both children were thrilled with the presents they received and have been engrossed in listening to their new CDs – Olly Murs for G and Pentatonix for M – or reading their new books, as well as the inevitable time spent playing on the Wii U that was M’s main present. This last has proved to be a real opportunity for the children to work together and pool their resources as they were keen to buy a Disney Infinity starter pack with additional characters and spent a lot of time researching and budgeting before asking me to help them buy their final choices with their pocket-money. We’ve been ice-skating, saw New Year in with friends, managed a return visit to the pantomime so M could see it too, gone on walks and spent time together as a family. All in all, the perfect end to 2016.