It was last summer when I first heard about Over The Wall and the amazing camps they run across the UK for children with serious health problems. M’s GOSH and EGID friend, R and his big sister, I

were fortunate to go to one and the photos and comments about it posted by their Mum, Annie left me determined to find out more and see whether M might similarly qualify for a place.

Over the Wall is a UK-based charity that is part of the international SeriousFun Children’s Network, which is based on an original idea set up by actor Paul Newman in the 1980s. He identified that the popular US summer camps attended by thousands of American school children every year often left out children living with chronic health conditions because of the inability of camp volunteers to cope with the often complex medical needs. His vision was to open up that opportunity to every child, regardless of their health needs, and he helped to provide full support for every child whilst they were away from home. These children got the full “camp” experience as they were unaccompanied by parents or carers and were able to enjoy a touch of “normal” in their otherwise complicated lives. From that simple starting point, one camp spread across the US and into countries across the world and soon followed the realisation that not only did the sick child miss out, but so, all too often, did their siblings and the idea for a separate siblings camp was formed.

I was delighted to learn about the siblings camp and, feeling that this was another great opportunity for G to escape the constraints of a sick sibling and be surrounded and supported by others in the same situation, duly applied; and so it was that a couple of weeks ago, G headed off to deepest, darkest Dorset for a week of serious fun. Just as her Young Carers group gives her the opportunity to have time away from M with other local youngsters in similar supporting roles, G spent the week with other 8-17 year olds from across the South of England and Wales, who all have 1 thing in a common: a brother or sister living with a chronic health problem.

It was a week to be herself, not defined or viewed in her role as M’s big sister, and encouraged to take time to focus on herself without worrying about M and how he would feel.

The children who attend are split into 8 groups: 4 colours determined by their age, with orange for the youngest and blue for the oldest; and then each colour split into separate boys and girls teams. Volunteers are a key part of the camps and their numbers match camper numbers, so for the 60+ children on the 2016 South Siblings Camp, there were 60+ volunteers supporting them, encouraging them and making sure they had fun. During the week the teams participate in a number of activities, from swimming to archery and from climbing to arts and crafts and much, much more. Their days are carefully planned with breaks and an after lunch rest hour, which G tells me was strictly adhered to, as well as a cabin chat every evening, where the teams reflect on their days and every member is awarded a bead to recognise what they’ve achieved. 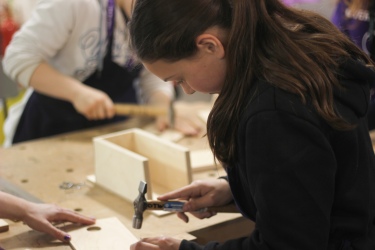 G’s enthusiasm about her time on camp has been wonderful to hear and she was keen to teach M the camp songs and share so many snippets of everything she got up to whilst there. I love the fact that there was little or no discussion about their chronically ill siblings, but instead the focus was well and truly where it needed to be – on these children who all too frequently miss out. I was impressed with the array of meaningful mementoes that G brought home with her, as impressed as she was delighted. More than just her purple OTW t-shirt and a black one for M, but also a carefully crafted wooden bird-box, team and camp photos, a hand-print card holding the reflections of the team – both peers and volunteers – on who G is as a person and why they appreciated her, and that precious collection of beads reflecting her achievements during the week, recognised by her team volunteers and accompanied by a written record of why they felt she had earned them. All of these things have built up her self-confidence in those few days away and have helped her feel even more valued within this new group of friends.

For us, it was an unnaturally quiet week in the household and there was a definite sense of something missing from our every activity.

M was reluctant to admit to missing having G around to play with and torment, but his move to sleep in her bed every night she was away revealed the depth of those feelings he didn’t want to show.

As a parent, you know you’re on to a good thing when you child asks for more and G has already asked if we can apply for her to go again next year if at all possible. Her enthusiasm about her experience has bubbled over and infected the whole family with M now having everything firmly crossed that his application for a place on the August Health Challenges Camp is successful. That would see him having those same opportunities to enjoy as G in an environment that we can be confident will be safe for him as there are medical volunteers and 1-to-1 support for the chronically ill children. Even better, the children have decided to make OTW the focus of their fundraising efforts during National Eosinophil Awareness Week this May. The one thing I haven’t mentioned is that these camps are offered completely free to those children who attend, making them truly accessible to all, which is a really fantastic part of this charity. Any funds that G and M can raise will help make a huge difference to others like them and if you’d like to make a small donation, you can do so via this link or the button on the right, with our thanks.

12 thoughts on “Over The Wall”