No sooner had we arrived back from London, than G and M disappeared off to South Wales with my Mum and my Aunt for the week leading up to the August bank holiday, leaving Mike and me at home to work, wash clothes and start to sort out what was needed for our bank holiday adventure in Manchester. We travelled to South Wales on Friday evening to pick the children up and spent the night there before heading off to Manchester the following morning. We decided to try and avoid as much holiday traffic as possible, so wended our way across mid- and North Wales to reach our final destination and that decision proved to be the best one we could have made as we saw very little traffic at all. We reached Manchester, and one false start later – who knew there’d be so many Premier Inn hotels in the Salford area? – had arrived and were ready to start our visit. 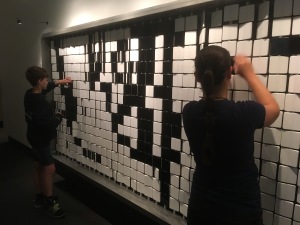 Sunday was dedicated to the IWM North (that’s the Imperial War Museum for the uninitiated) to support G’s GCSE History studies about the rise of Hitler in the inter-war years and the Cold War period, and proved to be an excellent exhibit to visit. Their audio-visual short films shown every hour were a great addition to everything that was on display and there was a nice mix of interactive elements for the children to do as well. The sections covering the time periods of most interest to us were, perhaps, not as in depth as we would have liked, but overall we enjoyed the time spent there. G and I also took some time to walk around their special exhibit about the Yemen crisis, although M had definitely had his fill of all things history about that point and abandoned the galleries for the cafe with Mike. It was fascinating to 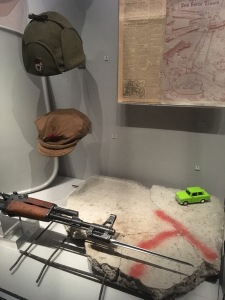 see G’s reaction to the photos and displays about this more recent crisis and she was keen to express her thoughts about the responses of politicians and their excuses for not doing what they knew was needed.

Originally we hadn’t planned to do anything for the rest of the day as we weren’t sure how long we would spend at the IWM, so over our lunch, we investigated and discussed where to head next. M was keen to do something “fun as a family” and so was delighted to learn that we could visit EscapeHunt Manchester and try our hand at one of their themed escape rooms. We were lucky to get a booking for their “The Last Vikings” challenge and had just enough time to walk our way from Mediacity across the city to the escape rooms. It’s the first time we’ve attempted an escape room as a family, but is definitely something we will try our hand at again. We had lots of fun, although we failed at the final hurdle and were in the midst of solving the last clue when our time ran out. 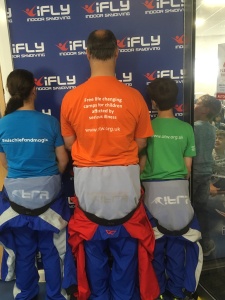 Our decision to go to Manchester were twofold, the first being the IWM North, but our second was perhaps the more exciting, especially for G and M. This was the day for their indoor skydive in aid of Over The Wall and despite a somewhat grumpy start from our youngest, we arrived at iFly Manchester with 2 very excited children. Unfortunately, I wasn’t able to participate due to a shoulder injury I sustained at the start of the year, but Mike was keen to try his hand too, so we had booked them a family session which allowed them to split 10 minutes “flight time” between them. I was impressed at what appears to be the natural skydiving skills of my husband and children and the smiles on their faces said it all. Mike and M are both keen to go back and do it again, but G is less convinced, though glad she gave it a try in the first place. All in all, it was a fantastic bank holiday weekend and we were back home for a rest before school went back the following week.