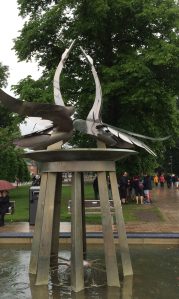 We may have had less than 48 hours to explore and enjoy all that Stratford-upon-Avon has to offer, but we certainly gave it our best effort. We had been hoping to introduce the children to their first Shakespeare play, but felt that “Anthony and Cleopatra” was perhaps not the ideal starting point, even for our theatre-loving duo. Instead, we settled for a backstage tour of both the Royal Shakespeare Theatre and the Swan Theatre, a climb up the Tower for some spectacular panoramic views and a visit to their fantastic interactive exhibit, “The Play’s the Thing“. I would be hard-pressed to say which particular tour was the favourite, but I think that for G and M, the hands-on activities and the costumes and props in “The Play’s the Thing” just edged out the lessons learned about fake blood, lighting and the other backstage secrets that keep these theatres running.

Our Sunday was gloriously sunny and M in particular was desperate to spend some time on the river. After our successful Saturday night dinner at Zizzis, we had meandered our way through Stratford and along the riverbank, where the children spotted some boats that they were keen to hire the following day. Our luck was in and we spent a fun, though occasionally slightly stress-filled 40 minutes exploring some of the river itself. G and M both took their turn to row the boat and thanks to some cunningly strategic seat choices, Mike ended up soaked through, whilst I remained comparatively dry. It hadn’t been a part of our original plans, but was a lovely way to spend an hour giggling with the family.

Our Sunday had been glorious, but sadly Bank holiday Monday itself turned into a fairly wet and miserable day. We had decided to spend Monday looking around the various Shakespeare properties and started at The Shakespeare Centre on Henley Street. Situated next door to Shakespeare’s Birthplace, the Centre had some great exhibits exploring not just the life and works of Shakespeare himself, but the time in which he lived. G was drawn to the lengthy list of his plays and took great pleasure in mentally ticking off those she has read,

although I hasten to add she’s been enjoying abridged versions, rather than the original plays themselves. She has been studying “Much Ado about Nothing” at school and was keen to not only share her knowledge of the storyline, but also to invest in her own copy of the play to read at home. She made the sensible decision to buy a version that explained the nuances of the text alongside the word themselves and couldn’t wait to get started on reading it.

M was less entertained by all we could see, though his attention was grabbed briefly by the small group of actors performing extracts from various Shakespeare plays in the grounds of his birthplace. Having gleaned all the information we possibly could handle, the children spent some time browsing potential pocket-money purchases in the shop before we headed off for our next destination. We managed to pick up a semblance of a picnic lunch, which we enjoyed riverside, sheltering under the trees from the somewhat persistent rain and then walked on to Halls Croft, a property that none of us had ever been to before. The top floor of the house contained displays of various

pieces of historical medical equipment, which both children found fascinating and they also took part in the mouse treasure hunt, albeit really for a younger age group. The gardens were glorious, but the weather just a bit too wet to really enjoy and so we beat a hasty retreat and trudged our way back to our hotel and car to start our homeward journey.

G was keen to make one last stop before we set off towards home. although M pointblank refused to leave the warm and dry environment of the car once he had settled into it. So instead, G and I made our way into Anne Hathaway’s cottage, where she listened intently to the short talks we were given about what we would be seeing and the history of the Hathaway family. Unfortunately, being the end of a grey, wet and fairly miserable day, there was not much natural light coming through the windows and the low-level internal lighting, in keeping with the age of the cottage, made it incredibly difficult to see, even for my eagle-eyed daughter. Cottage toured, we made a quick exit via the unavoidable gift shop and met up with Mike and M to start the journey home. All in all we had a great weekend in Stratford and are hoping to make a return visit in sunnier times to see all those bits we had to miss out this time round. 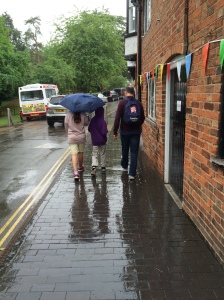