The last 10 days have been busy ones and I for one am glad to be heading into the last week of term, though the dawning of the school holidays definitely does not equate to any time off work for me this year. Looking back at my blog posts from previous years, it does appear that March and April are consistently a hectic time for us and this year was no different. World Book Day passed surprisingly easy, with M heading to school in his own clothes for his school’s Roald Dahl-themed day as he chose to represent “…a material witness at the trial of Goldilocks, Mummy…” in Dahl’s version of that well-loved Fairy tale.

We seamlessly segued from my 40th celebrations to M’s 11th birthday and onto my 4th blogaversary before celebrating Mother’s Day in fine style too. School presented its own challenges to both G and M, with homework tasks, concert rehearsals and posters revising the finer details of grammar and punctuation – fronted adverbials anyone? – filling our evenings and weekends. Next came 2 sets of exams: Performing Arts exams for both children with their Stagecoach school, followed just a few days later by M’s Grade 1 Cello exam, which I’m delighted to say he passed despite a persistent reluctance to give much more than a cursory nod to his daily practice. Continuing with the music theme, G performed with the school clarinet group at her school’s Spring music concert last week, whilst M is singing with his school choir at a regional music concert involving children from Junior schools across our county this week. 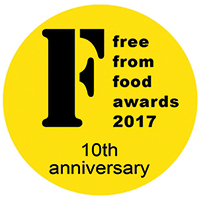 On top of all of that, we also managed to squeeze in a trip to London for 4 and an evening spent celebrating the success stories from this year’s FreeFrom Food Awards. Once again held at the Royal College of Physicians near Regent’s Park, the evening was a glittering event designed to recognise some of the fantastic freefrom products nominated this year and was a great opportunity to not only catch-up with friends from the allergy blogging world, but also try those tasty treats that had pipped their competitors to the winning post. Hosted by the fabulous Michelle Berriedale-Johnson, director of the FreeFrom Food Awards, with a helping hand from restaurateur, celebrity chef and awards patron, Antony Worrall-Thompson, the Awards were a real testament to the changes brought about in the Freefrom world over the last few years.

The complete list of winners from #FFFA17 can be found here, but the big winners of the night were Irish bakers, Bfree, whose Sweet Potato Wraps are impressively top 14 allergen free and won high praise from many of the judges for being “…enormously versatile, beautifully soft and pliable, a lovely warm colour and tasting delicious…” This year was the 10th anniversary of the FFFA and to acknowledge this remarkable achievement, nominations had been invited to recognise a Freefrom Super Hero from within the industry itself.

There were 5 very worthy nominees, all of whom are, without a doubt, heroes within the Freefrom world, but there could only be one winner and the inspirational Clare Marriage of Doves Farm was chosen for her unquestionable dedication to the production of numerous flour blends that have transformed the lives of those having to bake freefrom.

It was a fantastic night and it was wonderful to be able to mingle with the crowds of fellow freefrom foodies, rather than negotiate them with a small child in a wheelchair as we did last year! G not only enjoyed helping herself to a number of the goodies on offer on the Winners’ Buffet, finding a new gluten-free favourite with Kelkin’s chocolate-flavoured teacakes, but also found the courage to strike up a brief conversation with her very own Super Hero, Lucinda Bruce-Gardyne, the creator of G’s gluten-free bread of choice, Genius. I can’t wait to see what the year ahead brings for the Freefrom industry and am definitely looking forward to #FFFA18!