It never ceases to amaze me that there is a huge number of allergy-suffering children out there who love nothing more to cook despite their dietary restrictions. I know of so many EGID children, even those with feeding tubes, who have a passion to cook and have taken qualifications in food technology, even though there may be very little they can eat. One such story that has recently hit the headlines is of Abigail Carper, who is living with Eosinophilic Esophagitis (Eoe) in the US. She wrote to well-known celebrity chef, Gordon Ramsay challenging him to cook using only the limited safe foods she currently has and was delighted when he not only agreed, but invited her to join him in LA, where he prepared a meal that her Mum described as “a heavenly phenomenon“. It’s encouraging to hear that Gordon Ramsay and his staff also took the time to understand more about EGID, how to correctly read food labels and which foods could and couldn’t be used in their tailored meal. 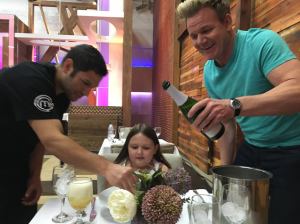 M and G are no different and both love watching cooking programmes on TV almost as much as I do. BBC offerings such as the “Great British Bake-off” and its recent spin-off, “GBBO Crème de la Crème”, are constant favourites in our household and nothing beats the high-energy episodes of “Diners, Drive-ins and Dives” on the Food Network Channel when there’s 30 minutes to spare at the end of the day. All of these have led to requests from M in particular for me to enter the competitions or invest in a restaurant for Guy Fieri to visit, thus showing off what he thinks of as my considerable culinary skills. Despite the massive compliments from what must be my biggest fan, I’m not convinced that my M-friendly bakes would live up to the standards expected on our favourite shows and I won’t be entering any cooking competitions any time soon. Unless an allergy one pops up and then I might…just might…be tempted!

As well as being amazed by the creativity and culinary techniques of the chefs on these programmes, I also find myself being inspired by their bakes and thinking through whether any of the recipes can be tweaked to bring something new to M’s diet. I know I’m not the only one as fellow EGID Mum and friend Berenice, kindly wrote a guest post for me last year about her attempt to create an allergy-friendly Madeira cake, after seeing an episode of GBBO. No matter the time of year, there always seems to be one programme or another that we can enjoy together as a family and this May has been no different. All it took was a single 30 second trailer and M was smitten, this time with “Paul Hollywood City Bakes“.

, which sees Paul Hollywood, one of the stars of GBBO, visiting cities around the world, investigating their bakes, meeting bakers and putting his own unique twist on a speciality dish in each venue.

M has been entranced by the entire series, which has proven to be a great distraction from his broken leg. From the laws surrounding the baking of a particular cake in Munich, to the bullet-ridden suite, location of a mafia killing at the Biltmore in Miami, he has hardly paused for breath when regaling anyone who’ll listen with the stories that those half-hour episodes have shared. We now have a long list of “must-go-to” holiday destinations that both G and M are desperate to visit as soon as it’s even remotely possible. G was delighted to see a couple of naturally gluten-free bakes highlighted and even better, there have been the occasional bakes which I am sure I could translate into M-friendly versions without too much effort. I’ve yet to decide which of these I will turn my hand to first, but you can be certain that I will share those recipes once they’ve passed the rigorous testing of my discerning duo.