Last week was a quiet week in our household as G was away at camp and M struggled without his big sister around.  With only one child under my feet, it’s undeniable that the everyday tasks were a …ok,  a lot easier to achieve in a reasonable time scale and there was a noticeable lack of temper-driven disagreements and raised voices, but there was no mistaking the achingly big G-shaped hole in our family that nothing else could fill.

By bedtime on Monday, we had finally tracked down and ticked off the last remaining items on the list, the bag of food and snacks had been delivered to the safe-keeping of Miss K and I was certain that clothes were named…bags were named…in fact, water bottles, plastic mugs, wash-kits, you name it, everything was named and the all-important, precious piece of her blanket was safely tucked away amongst her things. 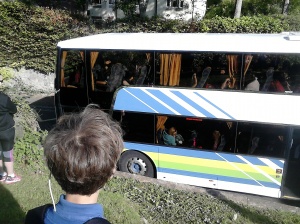 G was feeling happier as she now knew she was in the same activity group as one of her best friends and was equally delighted about the teacher who’d be looking after them for the week.  We convinced them into a relatively early night as Tuesday was an early start for us all in order to get to school for 8am, and even M managed to pull himself from his pit and eat some breakfast before we headed on our way.  Those last few moments before G boarded the coach and left for her week at camp were emotionally charged as M stood beside her, with his arms wrapped tightly around her waist and just hugged her quietly, barely admitting to himself, let alone to the rest of us, what was glaringly obvious to see – that he was really going to miss her whilst she was away.  He was by my side as we waved them off and then disappeared into the school playground with his friends, ready for the day ahead.

News took a little time to trickle back to those of us waiting at home to hear what our adventurers were up to, but when the reports finally arrived, everything sounded positive. The kids were having a marvellous time and challenging themselves with lots of new experiences. From clambering over and under logs to wading through deep mud, the activity week was everything they expected it to be.

To my delight, G tried her hand at everything, even the dreaded caving and whilst she didn’t venture as far as some of the others, I am thrilled that she conquered her fears and made her way through 2 of the 3 caves they explored, an amazing achievement for someone who had been adamant she wasn’t stepping foot into a cave, no matter what. She enjoyed almost everything they did and was quick to regale us with tales from the week. Her favourite activity was the Woodland Scramble, which involved donning a wetsuit and rolling head-first into a Welsh river as well as dunking her head under a waterfall. Their evenings were filled with headland walks, evenings on the beach, BBQs and a disco before the obligatory mug of hot chocolate and a good night’s sleep.

The week was a resounding success from an activity point-of-view and G chattered for hours once she was home about all she’d done.  Sadly though, it didn’t quite meet my expectations on the food front.  Despite providing a bag full of safe foods to get G through the week, it was returned to me on Friday with very little missing from it.  I gently quizzed her about what she had eaten and was disappointed to learn that whilst the dairy-free aspect of her diet has been well-managed, there were some significant failings from a gluten-free point of view.  G had been assured that the Kelloggs cereal was definitely GF (it’s not), had been given crisps that were covered with “May contains” and her hot chocolate was soya milk laden with cocoa powder and very little sugar to sweeten it: a taste so bitter that she struggled to drink it and after her friends had tentatively taken a sip, they understood why she was so reluctant.  There was a definite lack of inspiration in preparing her meals as GF pasta with tomato and basil sauce appeared to be the go-to alternative for any meal that wasn’t G-friendly and her only dessert was from the snack box I had sent along with her.

Fortunately for all concerned, G doesn’t suffer extreme reactions to either gluten or dairy, but she was left feeling less than 100% by the time she got home and not just because of the lack of sleep.

In contrast, the only thing of note that happened in our household last week was a complete overhaul of G’s bedroom and whilst there’s still a little more work to do, it’s a room to last her through her teenage years.  And so the week ended as it had begun:  with M and I waiting on the grass bank outside the school for the coach to appear and deliver G back into our arms.