I can’t begin to tell you how much I love being able to post new recipes on my blog once again.  Having a fourth safe food has really opened up some exciting opportunities for experimenting in the kitchen and I’ll be sharing the successes over the coming weeks as well as possibly lamenting the disasters.  Today’s recipe is actually one of the first I adapted when we started the process of food reintroductions and, just like my chicken liver pâté, is an old favourite harking back to the days when the children were small.  Arancini di riso, or Italian deep-fried savoury rice balls, have become a firm favourite for M’s tea and G, Mike and I all enjoy them occasionally too. 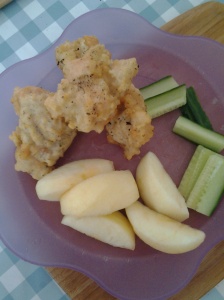 The key to their success lay in perfecting the tempura-style batter I wanted to use to coat them, as breadcrumbs won’t be seen in my kitchen for quite some time.  Tempura is a traditional Japanese light batter, which is typically made using flour and water, though some recipes include egg too.  I am very much a visual cook, rather than one to strictly follow a recipe and so my first few batches varied massively as I played with the quantities of rice flour and sparkling water used until I reached my idea of tempura batter perfection.  Using sparkling water makes the batter even lighter, but you can easily substitute it with cold tap water and will still end up with a delicious dish.  My final recipe has been carefully measured out and written down to share.

For me, the best bit about cooking Arancini di riso for M is that there are no rules.  Of course there’s a traditional Italian recipe, but you can add whatever you want to suit your dietary needs.  We have graduated far beyond the plain rice balls that I started with and now have numerous successes under my belt.  M’s current favourite is rice mixed with shredded chicken and cucumber and seasoned with salt, pepper and plenty of sage.  With my tempura batter recipe perfected, I have used it to cook M-friendly chicken “nuggets”, which have also been a big hit.  With the addition of apple, I’m planning to try a dessert version soon using stewed apple and some home-made and M-friendly caramel, but that, as they say, is a story for another day!