With Christmas now less than a mere 3 weeks away – and counting – our preparations are in full swing.  Christmas lists have been created; letters to Father Christmas written; Christmas cards written and very nearly sent; presents bought, wrapped and squirreled away until the tree is up; and my attention has now turned to the small matter of the food. 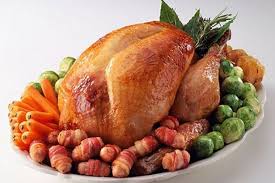 A couple of weeks ago, I was given the job of cooking a Sunday roast for my Aunt whilst she was staying with Mum.  As I prepared the chicken and veg, I felt a sudden desire for stuffing to accompany the meal.  I have fond memories of delicious home-made stuffing on Sunday lunch-times as a child and realised, with a pang, that G and M would have no such recollection due to their food allergies.  As a family, stuffing disappeared from our table two and a half years ago when M first started on his MEWS-diet.  It has made the occasional reappearance at Christmas for us adults, but never in a M-friendly format.

Inspired by the pleasing aroma of chicken seasoned with sage that was drifting from the oven, I decided then and there to find a recipe for stuffing that I could tweak to meet G and M’s food requirements.  I sourced a vegan recipe for Sage and Onion stuffing and set about pulling the necessary ingredients from my Mum’s cupboards to start the mixing process. 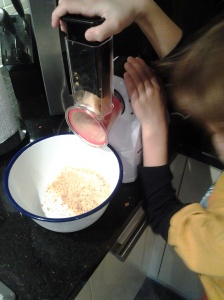 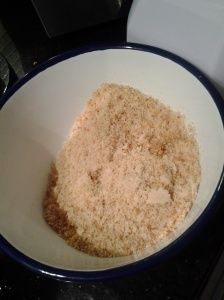 Despite my fears that this would turn out to be an unmitigated disaster, the final outcome was delicious.  Sadly, I was unable to convince G to even try a tiny morsel, but M set to with gusto.  He enjoyed the flavours, though he complained it contained too much onion for his tastebuds.  My final recipe can be found here and I am hoping to add recipes for other varieties for Christmas as I try them at home.  It was a great result for a Sunday morning’s work and I’m looking forward to tweaking more recipes to accompany the Christmas turkey.  The only question now is which one to adapt first – Chestnut, Sausagemeat, Cranberry or maybe all 3? 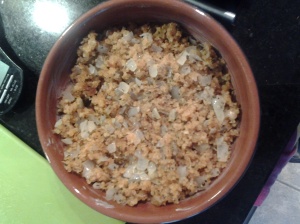 Unfortunately, I forgot to photo the final product and we ate the lot, so you’ll have to be satisfied with a photo of the pre-cooked version!