In November 2016, G and M were lucky enough to be invited to participate in the first ever Takeover Challenge at GOSH. They spent the day running the Development and Property services department at the hospital and even managed to somehow convince the staff to take them onto the building site of the new research centre being built opposite nearby Coram Fields. One of the jobs they had undertaken during that Takeover Day was to help design the hoarding to surround the building site and we were delighted to see it in place when we visited GOSH for the Big Youth Forum Meet-Up in mid-October as both children got to see their hard work actually being used in real life. 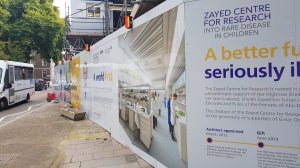 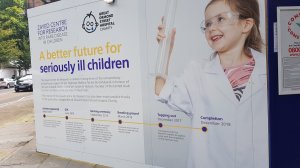 So it will come as no great surprise that the minute they heard that there would be another opportunity to Takeover at GOSH this year, both G and M leapt at the chance. Unlike last year, when they opted to be part of the same department, this year they determined to do different things and each took on very different roles with G joining the ICT department as an ICT project manager, 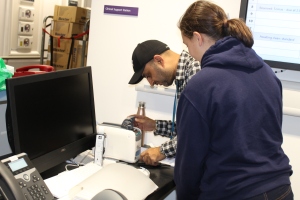 whilst M became a clinical scientist for the day. We were fortunate that their secondary school recognised the value in them attending this day and were happy to authorise their day off, something that M in particular was delighted about. I was already in London for the week attending the Foodmatters Live conference and so Mike set off from home extremely early on the Wednesday morning to get the children to the GOSH reception area in time for their respective days to start.

We had arranged that I would meet up with them for tea and over an early supper at Wagamama in Leicester Square, I was regaled with excited tales about the adventures of their day. G’s day was spent learning about how the ICT department is involved in the day-to-day running of GOSH and more specifically understanding how the staff ICT helpdesk is run and looking at solutions to common IT problems. G had an opportunity to visit different hospital departments and help resolve the problems some staff members were experiencing and even managed to successfully close a couple of cases herself.

Her final task of the day was to visit the brand new clinical building that has recently opened at GOSH and understand how the decisions around what ICT equipment to provide for patients are made. One of her mentors for the day also took her to visit one of the laboratories in the hospital knowing that M was based there, although she didn’t spot him during her visit.

M’s day was focused on understanding the role of the clinical science team at GOSH and in particular learning more about gene and cell therapies as well as the research that is undertaken in the hospital. He was keen to take on this role because of the rare status of his own condition, EGID, as it demonstrated just how important this type of research is. M spent the day  learning how to split blood samples into different cell types, preparing the cells for analysis, generating DNA fingerprints and analysing DNA for mutations. The team also showed him what eosinophils look

like when they’re put under the microscope and gave him an insight to what his scopes might have looked like prior to his diagnosis. As usual, M learned a lot from his day and when he and I attended our local hospital a week later for a set of bloods to be taken, he was keen to explain to the nurses there just what would happen next with the samples they were taking from his arm.

Both G and M had an amazing day at GOSH and we are, as ever, extremely grateful to the YPF and youth liaison team who not only offered them this fantastic opportunity, but also made sure the day was a huge success for them both. I know M already has his sights set on Taking Over yet another department next year, but we will just have to wait and see what happens!