With the demands of work, home and children meaning that Mike and I are barely managing to lift our heads above the parapet for more than 5 minutes at a time right now, it’s hard to believe that 6 weeks ago we were relaxing and enjoying my #40thcelebrations in New York. 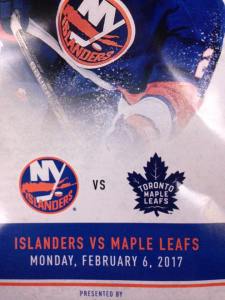 One of the unquestionable highlights of our trip was the opportunity to attend what has to be one of Mike’s favourite sporting events, a NHL (National Hockey League) ice hockey game and even better could watch Mike’s home team, the Toronto Maple Leafs up against local heroes, the New York Islanders. This was undoubtedly more of a treat for Mike than for me, but I’m not ashamed to confess that I much prefer watching ice hockey live to on TV and this game was an absolute humdinger of a match to see.

What I love about ice hockey is the friendly rivalry between the opposing teams and that, no matter where you sit and what team you support, the love of the game is the most important thing. We sat in what were fantastic seats at Brooklyn’s Barclays Center, Mike proudly wearing his Maple Leafs jersey and with a true mix of Toronto and New York fans surrounding us.

There were good-hearted jibes, enthusiastic cheers and an atmosphere that reflected just how much every single person there was enjoying the skills they were seeing on the ice. In front of us sat 2 families, one supporting New York, the other Toronto and the kids gleefully switched seats and gave high-fives to all surrounding them whenever their team of choice scored. I had forgotten just how much fun an ice hockey game is and can’t wait until we have opportunity to take G and M to see their first NHL game, no matter who’s playing.

This was an outing that had been carefully planned in advance, but we also took advantage of a free night combined with a yearning to visit Madison Square Gardens, and managed to secure tickets to watch my very first NBA (National Basketball Association) game. To say I was somewhat underwhelmed by the antics of the New York Knicks vs. the Los Angeles Clippers is, well, an understatement, but I was completely dazzled by the stellar performance of their cheerleading squad both before and during the game. Basketball is a game that I really haven’t found an affinity for, much preferring the hard-fought matches of the netball of my youth. I’m glad we went 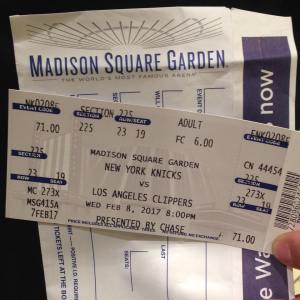 to the game and would love to take the children along for the experience at some point in the future, but I don’t think I’m ever going to be converted to a hard and fast basketball fan. In fact, I was far more excited by the number of celebrities who were there watching the game too and loved waiting to see which film or TV show clip would be played to reveal the next well-known star on-site. I’d be hard-pressed to select my favourite star, but whilst Chris Rock and John McEnroe are both are up there with the best of them, it was Mr TeenWolf himself, Michael J Fox, who took the top spot in my heart.

Our night out at the Gardens was our last night in New York, but it was definitely not the end of our Big Apple adventures. We always knew that travelling to NYC in February meant that we might be subject to winter weather, but we never expected the extremes we experienced over the length of our stay. It had started with below freezing temperatures with glorious sunshine, passed through grey, wet and miserable and gave us a penultimate day of beautiful spring weather that saw us shedding the thermals and thick winter coats that had been our faithful companions throughout the holiday. And then, just as last week’s Winter Storm Stella buried the city in around 18cms of snow, her predecessor Winter Storm Niko arrived to give us a final day of bitter cold and the snow that Mike had been longing for the whole time we were there. We spent our last morning trudging through the snow in Central Park, capturing the landscape in photos to show the unbelievable difference that a mere 24 hours can make. Our flight was delayed by a couple of hours, but we spent some great time people-watching at JFK airport before boarding the flight and grabbing what sleep we could on our homeward journey. It was an absolutely amazing holiday and I can’t wait to visit again, perhaps with G and M in tow. 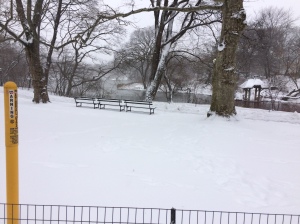