It does sometimes take a while for me to catch up on my blog with what’s been happening in real life, but a near 4-month gap to report much be something of a record, even for me. I’m not entirely certain why it has taken me so long to share this story, but I can only imagine that the constant stream of events since the start of February pushed it out of my mind and it was only thanks to a search through some old photos last night whilst I was looking for something else, that my memory was jogged and the subject for today’s post settled. What now feels like many moons ago, G was set a creative homework, something that she was excited to do, but a little stumped as to the direction she wanted to go. The task was to make a model of a cell for science and the options available were seemingly endless.

There were no strict guidelines as to the type of cell to be created and she had free reign as to the medium of her model, with even cake being a possibility if she so wanted. As is often the case when tackling the more challenging pieces of homework set, G and I spent some time discussing at length what she could do before reaching a decision.

She had made a few uninspired suggestions, but I could tell her heart wasn’t really in them and her enthusiasm waning. G loves being creative, art being one of her favourite lessons at school and I knew that if we could only settle on the right cell, she would soon warm to the subject and give her all to making the best model she could. So often I’m reluctant to drag EGID into G’s world any more than is necessary, but this time I wondered if researching and then making a model eosinophil would be the answer to her dilemma.

To my relief, as my fount of inspiration was certainly beginning to run dry, she loved the idea and instantly sat down to research as much as she could as, whilst we know all about what eosinophils do in the body, we didn’t know what an individual cell looked like.

Having found some good images on the internet, G then addressed the matter of her model-making. Despite an initial yearning for cake-baking and decorating that appealed to her 12 year-old senses, although a lot less to me, we instead headed off for a trip around our local craft shop and pinpointed the few essential items that would effectively illustrate the structure of an eosinophil without requiring too much parental input and inspiration. A quick tutorial once we were back at home on how to best construct her cell gave her all she needed and I left her to it at the kitchen table, whilst I busied myself in the same room, preparing packed lunches and dinner. Her finished model was fantastic and the diligent labels indicating the different part of the cell were the result of her focused efforts and careful work. What’s more, her model eosinophil proved to be the catalyst for other work that she chose to similarly link to her experiences of EGID and which ended up with her showing last year’s NEAW video to her science class to teach them more about the condition. G has been rewarded for her hard work by her science teacher with some much coveted house points and we’re so proud that she felt confident enough to share an aspect of her home life with her school science class. 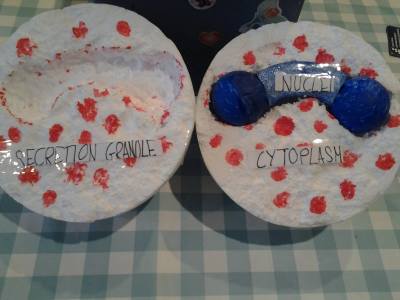 1 thought on “When home life met the school science class”