With only the occasional exception of the odd batch of chicken liver pâté, M has been consuming more than his fair share of dry rice cakes on a daily basis over the last 14 months. What started as a necessity because of his limited diet and the lack of finding a delicious and safe spread to use, continued because, however I looked at it, I couldn’t see a way to create that missing spreadable element. The recent discovery of a great rice cream which could be spread a little like butter has meant that things seem to finally be on the up as it not only provides a tasty addition to an otherwise inarguably bland food, but also adds some much-needed extra calories each day. 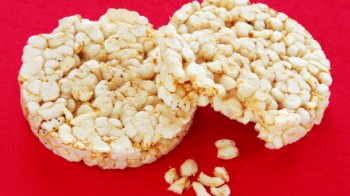 Even better, that upward trend continued this past weekend when, as Mike prepared some toast with lemon curd for my breakfast, my mind was drawn back a few summers to when I realised that I could make dairy- and soya-free lemon curd for the children to enjoy and I wondered whether I could take that original recipe a step further and produce one that would achieve M-friendly status.

To my delight, this looked to be one of the easiest recipe adaptations I’ve had to tackle in the last 15 months as there were only 3 ingredients to be replaced and all could be done in the simplest of fashions. My coconut milk became rice cream, the cornflour mix replaced by rice flour and the safe margarine could be substituted by coconut oil. Refusing to tell either M or G what I was planning, I sent them out on an errand to buy some more lemon juice from our corner shop and achieved a much-needed break from the near constant bickering we’d been subjected to so far that day. It was a beautifully sunny spring afternoon and I knew they’d benefit, not just from the feeling they were doing something useful for Mummy, but also from some sun, fresh air and a stretch of their legs. M was somewhat confused by my request as he was insistent I had more than enough lemon juice in the fridge already, but he was readily swayed by my demand for more and the promise of a special treat if it all worked out.

The process of making the lemon curd was actually a lot easier and quicker than I remembered. I have vague memories of making “proper” lemon and raspberry curd when G was in Reception as an end of year gift for her class teachers and remember standing at the hob, stirring the hot mixture until both arms felt tired. I’m not sure why this recipe and method don’t take so long, but I’m definitely grateful for anything that takes less than 30 minutes to whip up these days. To my surprise, despite their initial interest, G and M soon became distracted by other activities and so I was able to finish the preparation and get the 2 jars into the fridge without them noticing. The distraction of a dairy- and soya-free chocolate fondue for pudding – my desperate attempt to use up as much of the leftover Easter chocolate as possible as sadly it’s not been a success for M – proved invaluable and Mike and I were able to hold off the big reveal until it became Sunday teatime. 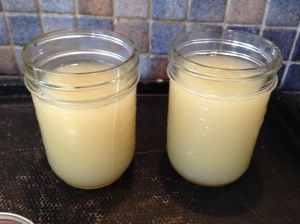 The flavour is very sharp and not overly sweet and M has loved every mouthful, demanding it on a near daily basis for either lunch or a bedtime snack. G says she enjoys it too, though I’m certain she won’t be asking for it on anything like as regular a basis as her brother. Most importantly, it provides a break from the dry mouthfuls of rice cakes that M has become accustomed to and that, in my world, is absolutely priceless.

2 thoughts on “The missing element”