February 29th: a special day, an unusual day, a day so rare that it only comes round once every 4 years and, quite frankly, the perfect day to mark Rare Disease Day 2016. This is the opportunity to raise awareness of rare diseases and the impact they have on the people living with them, not just with the general public, but amongst medical professionals and policy-makers too. It initially launched as a European event in 2008 and is now marked in over 80 countries worldwide.

What is meant by a rare disease? Definitions of “rare” do differ from country to country, but across Europe a disease is considered rare when fewer than 1 in 2,000 people is diagnosed with it. The threshold in the USA is defined as when fewer than 200,000 Americans are diagnosed with that illness at any given time.

Who is affected? Rare diseases can affect everyone, they’re not fussy about who they pick on. Over 3.5million people in the UK are affected by a rare disease, which equates to 1 in every 17 UK nationals. Somewhere between 50% and 75% of rare diseases will affect children and scarily, 30% of rare disease patients will die before they reach their 5th birthday.

Why raise awareness? The symptoms of a rare disease are frequently multiple and varied and not only are they not exclusive to that illness, but neither are they all experienced by all patients, which makes diagnosis a long and drawn out process. All too often the diseases are misdiagnosed and beneficial treatment can be unavoidably delayed. A lack of scientific knowledge and consensus throughout the medical community can add to the complexity of reaching a diagnosis and adds significantly to the burdens placed on the patient and their family.

What does Rare Disease Day mean to us?

Imagine being told that your child has a chronic illness that neither you, nor most of the medical professionals you’ll end up meeting from that point on, can pronounce – or have even heard of until that moment.

Imagine finding out that that illness is rare: that around 1 in 10,000 people are diagnosed with the most common form, but that your child has one of the rarest forms and that there is little research into it. 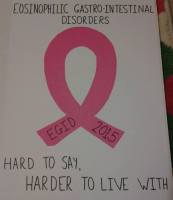 your family’s life on a daily basis.

(For those who wonder if EGID is real, try living with anyone who is in the midst of an EGID flare up and, bigger picture or not, you’ll understand why we will continue to fight for research into this unquestionably chronic and life-impacting illness.)

Imagine the heartbreak of holding your sobbing child at 3am, with tears streaming down your own face, as you struggle to find some, any words to bring him a little comfort.

Imagine taking one food after another out of his diet in a hope to bring some relief from the chronic pain and poor bowel function, until you are left with the final realisation that perhaps you need to remove everything and feed him via a tube to see if that is the answer you’ve been seeking for the first 9 years of his life.

And then imagine starting to put foods back in, one at a time, only to discover that his body has allergic reactions to more than you ever thought possible.

Does this sound familiar to you?

This is the reality of the last 3 years of our life with a rare disease as the truth of EGID is that symptoms are complex, understanding is limited and medical research funding scarce. M’s diagnosis with EC makes him rare, so please help raise awareness today, not just about EGID, but of other rare diseases and those living with them too.

1 thought on “What makes them rare”