Today, November 17th, is World Prematurity Day. A day that acknowledges the early arrival of 15 million babies across the world every year, a statistic that increases annually. Pre-term births are defined as “babies born alive before 37 weeks of pregnancy are completed”, but…

You might recall images of micro-preemies, those babies born so early and so small that they can be cradled in the palm of their parents’ hands. You might think of babies covered with tubes and wires, enclosed in incubators or even tucked into supermarket sandwich bags to help keep them warm enough to survive. You might know of the risks associated with an early arrival and how hard the doctors, nurses and parents fight, with every inch of their being, to get those babies through another day and another long night. You may even have survived the weeks of hoping to get “just one more” week through your pregnancy, knowing that every single hour counts.

The thing is that preemie babies come in all shapes and sizes; the reasons for their early arrival are many and varied; and every family has a similar, but also hugely different story to tell. Each parent and child has their own individual challenges to face and yet premature birth is a common bond that links them all. Let me introduce you to 3 special preemies, each with a unique set of circumstances and a shared experience marking their arrival  :

Of course, you’ve already met the first one: G just crept into the premature category, arriving at 36+6 nearly 12 years ago and weighing an extremely respectable 8lbs. Her delivery was the result of fears about my T1D and the signs that my placenta was beginning to fail, so the doctors made the decision to deliver her to ensure she had the best start in life. Even though she had an initial problem with plummeting blood sugars, G’s stay in SCBU (Special Care Baby Unit) was short at just 3 days and thanks to the wonderfully supportive nurses on the High Dependency ward who looked after us both, Mike, G and I were able to come home a week after she was born and spent our first family Christmas together at home.

M was even more impatient to arrive than his big sister, although his birth weight of 5lbs 12.5oz at 33+1 gestation was equally impressive. M spent his first few days on NICU (Neonatal Intensive Care Unit), although there were times we felt something of a fraud, especially compared to the tiny 26-weeker 2 cribs along, who had been born at exactly 5lbs less than him. We had been warned from the moment I was first admitted at 26 weeks pregnant that once he arrived, M would almost inevitably need to stay in hospital until he reached his due date. It is of great credit to the dedicated doctors and nurses who looked after him that we were, in fact, able to bring him home after just 3.5 weeks and in perfect time for Mothers’ Day. 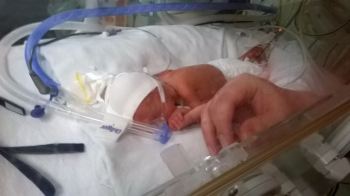 And this tiny, but beautiful fighter is B, the second son of our close friends and M’s godparents, L and C. Due to fetal distress resulting from pre-eclampsia, B was born at 27+2, weighing just 1lb 9oz and has had a very different battle so far than either G or M. He had suspected NEC (Necrotising Enterocolitis) in hospital and for a week things were very touch and go. Despite this rocky beginning, B is an incredible battler and even though he came home on oxygen after a long 98 days in hospital, 5 weeks later he had been successfully weaned off that too. 18 months on, he is a happy, loving little boy, who may be on the small side for his age, but is otherwise doing well and I know that his parents, just like us, will be forever grateful to those medics who have helped B fight and win.

These 3 precious bundles may not have had the easiest start in their lives, but we are lucky that they have each survived and become an irreplaceable part of our families. With a national health service that is in crisis, the neonatal units where G, M and B and thousands like them are cared for on a daily basis are seriously overstretched and understaffed. These children need an incredible level of specialist care to help them make it through those critical first few days and weeks of life and the doctors and nurses who give it are simply amazing as they offer not just medical care to the babies, but emotional support to the whole family. That is a gift that cannot be easily replaced and we know that we were extremely fortunate to be able to receive it.