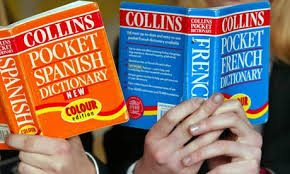 Two weeks ago, G and M came home from school bursting with details of their up and coming MFL Day – a day to experience more about the Modern Foreign Languages they both learn at school.  Not content with themed craft activities, dance lessons and extra language practice on the day itself, school naturally decided a food treat would be an ideal extra for the day too.  G and the rest of Years 5 and 6 would be baking and then tasting their efforts in school, whereas M and the others in Years 3 and 4 were simply going to enjoy eating a shop-bought version. The teachers couldn’t decide on an easy, Spanish treat, so the whole school would try a French delicacy instead.

Just when I thought baking couldn’t get any harder, I was presented with the ultimate baking challenge – chocolate croissants!

It was relatively easy to accommodate G’s dietary needs for the day as she is only wheat- and dairy-free.  G could participate in the French cookery lesson, where the children were using supermarket croissant dough and milk chocolate to create their masterpieces, but rather than eating her own creation, G would give hers to her teacher and instead enjoy one of the marvellous Genius gluten-free Pains au chocolat that I had tracked down in our local Tesco. We hadn’t tried these before, but G assures me that they were absolutely delicious and she can’t wait to enjoy them again. 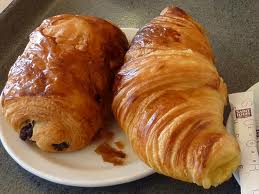 M, naturally, was a completely different story.  School had agreed that I could provide a M-friendly chocolate bar as an alternative to the chocolate croissants the rest of his class would be enjoying, but I wanted to see if I could bake an equivalent for him to eat.  Had I realised just how much work was involved in making these French delicacies, I might not have even entertained the thought, but having researched a recipe, I thought I’d give it a go.  M has been finding things tough recently and I didn’t want him to feel even more different from his classmates.  I was determined to attempt an edible and reasonably delicious safe version of chocolate croissants.

The original recipe I found was a vegan one and needed a little tweaking to allow for M’s current wheat- and gluten-exclusions.  I replaced the plain flour with rice flour and took the decision to not add xanthum gum this time round.  The croissant dough that resulted was difficult to work and I found it nearly impossible to perform the “laminating” process that is required when making this specialised pastry, 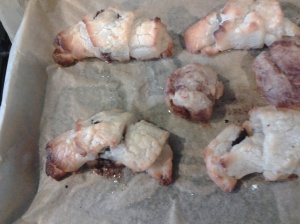 I will no doubt attempt these again and will play around with my recipe to include xanthum gum to see if I can achieve the perfect consistency needed for this dough.  I added the chocolate, baked the croissants and was pleasantly surprised at just how authentic my first attempt looked.

However, whilst the end result was not quite as I had imagined it, M was delighted that I had managed to produce a reasonable croissant and declared it an immediate hit.  At the end of the day, I got the result I was after, one happy boy!