As I watched my active 7 year-old today, I realised that not many people would believe that 2 weeks ago he was in hospital going through 3 days of intensive bowel preparation, an anaesthetic, a colonoscopy and an endoscopy.  This child, who is currently refusing to give in to his tiredness and go to sleep, has been running around like a wild thing, laughing and having fun.  This time 2 weeks ago, he was quiet, in pain and reluctantly resigned to his fate.

A week ago, much to the surprise of friends and colleagues, despite having spent a week in GOSH, M was back at school as if nothing had happened.  He reluctantly agreed to my ruling of no PE for the week, but I couldn’t stop him running around the playground with his friends trying to catch up on his missed week of fun.  A week ago, we pulled him off the trampoline at home with a suggestion that bouncing around was perhaps not the most sensible thing after having investigative procedures on his GI tract – he has bounced back to full health, almost literally!

That Thursday was a long day for us all.  Mike had travelled to London on the Wednesday to spend time with M and help distract him from all that was planned.  As well as the extensive bowel prep, M had had a cannula put into his left hand on Wednesday afternoon and had once again impressed the nurses with his stoicism as he watched them put the needle in without shedding a tear.  He laughed and joked with them as they did it and even discussed whether they would need to put a second one in his other hand.

Mike arrived back on Kingfisher ward around 8am Thursday, bringing with him a much-needed croissant and vanilla latte for my breakfast.  M had been without food for 24 hours by this point and, whilst he accepted that I had to eat for my health, he didn’t want to see Mike eating food.  We sat with a nervous M and played endless rounds of Top Trumps as we waited for the nurses to come and prepare him for the scopes.  He eventually changed into a hospital gown and disappeared off to the Wii for one more game of Lego Batman with Mike to relieve the tension.

Finally, the nurse and consultant arrived to meet us and summon M to the investigation suite.  We took Cat in with him, but M was determined to prove how brave he was and asked me to take Cat back to his bed with me.  We kissed him good luck, watched as the anaesthetist put the “magic milk” into his cannula, heard him count unsuccessfully to 10 and then beat a hasty retreat back to his cubicle to wait for it all to be over. 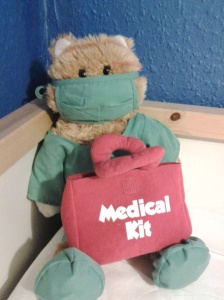 Poor Cat, all ready for surgery, but relegated to wait instead

Nearly an hour and a half later, and this time prepared to be waiting beyond the 45 minutes the hospital staff had said, the consultant appeared to talk through what he had seen during the procedure.  The best news was that the scopes looked much better than last time and whilst there were still obvious areas of inflammation, the damage had been reduced and consequently M bled considerably less than previously.  There are signs of some problems in his upper GI tract, but we need to wait for the biopsies to come back from the laboratory to see what they show.  Everything supports the EGID diagnosis and shows that the medicine and restricted diet are making a significant difference to his insides and we should continue to persevere with them.

Even better, M’s reaction to the anaesthetic was significantly better than the previous times and whilst there were some unexpected concerns with low blood pressure and pulse rate – he really is my son as I suffer the same problems – the hallucinogenic reaction was relatively mild and within 3 hours of coming round from the sedation, he was back playing the Wii with Mike., something we had never even imagined would be possible.

So now we’re on to our next wait until the results are returned and every week between now and our follow-up appointment is going to be an extremely long time.