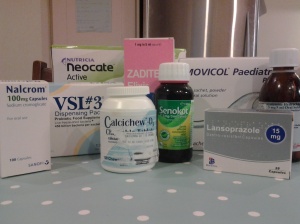 Today’s post was going to be a relatively short one.  One to just give you a glimpse of the amount of medicine M takes every day.  One to raise your awareness of the medical impact of this condition; but the thing is, taking 9 medicines on a daily basis is never going to be a short story, even though compared to some EGID children, this isn’t necessarily a lot.  M does a great job of taking his daily doses and has moved on from last summer’s need for Grandma’s jam to being grown-up enough to take his capsules the “adult” way, sometimes even swallowing both of his lunch tablets at the same time – something I don’t think I could do.  I’m also going to attempt to explain what each medicine does and why he takes it, but keep in mind that I’m no medic and so my knowledge is that of an EGID Mum, nothing more.

As well as keeping on top of all that and making sure M has the right medicines in the right doses at the right times, we also have to make sure he’s eating well and nothing creeps into his diet that shouldn’t.  Tonight was “Film night” at school and I was the parent standing at the tuck shop, scanning the ingredients of each and every item being sold to check what was and wasn’t M-friendly!  In comparison, our meals today were a lot easier:

That can cause the biggest problems, as we learned to our dismay last May.  Following our previous GOSH appointment, life had been ticking along quite nicely.  We still hadn’t achieved an “accident-free” life for M, but things were improving and he no longer had soiling issues on a daily basis. We hadn’t got a confirmed diagnosis, but we seemed to have reached a reasonable status quo and had hope that things could and would continue to improve.

M was happily taking his medicines daily and we had conquered the protein shake challenge and had possibly the only child in history who liked taking his “special” drink. Just when things seemed to be settled and quiet, we suffered a setback that none of us had been anticipating.

M woke one morning with a sore and slightly puffy left eye, which two days later, looked like someone had bopped him in the face and left him swollen and bruised. Having had my own eye problems over a decade earlier, this is one area that I am particularly sensitive to and without questionning my decision, we all headed to the local eye hospital. M and I went into A&E, whilst Mike and G disappeared off for a walk around the harbour and a second breakfast. We didn’t have to wait too long and the consultant quickly diagnosed Blepharitis, which is an inflammtion of the rim of the eyelid as a result of a bacterial infection. I was shown how to soothe M’s eye and we went away with a prescription for an antibiotic to ensure that the infection didn’t linger. Oh, if only every diagnosis and treatment was as swiftly delivered as that one!

One week later and a follow-up appointment at the Eye Hospital, and M’s eye had returned to normal and the infection appeared to have cleared. BUT, we hadn’t expected the impact of a simple infection and a course of antibiotics on M’s gastric health. It was like going back to our starting position a year earlier as all of the improvements disappeared and M’s health took a nose-dive. This was disappointing for us all and extremely frustrating for M. Having gained limited control over his toileting and his diet, we were back to square one and M couldn’t cope with this change to his circumstances.

What followed was a disheartening and frustration-fuelled few months. We made sure that his diet was as tightly controlled as possible and gave M as many outlets for his angst as possible. During this time, we learned that any infection that M experiences, even something as simple as the common cold, can upset his gastro system and cause a flare up. This leads to a return of the original symptoms and can take time to recover from. The eye infection started M’s flare up and the course of antibiotics added to it. I now know that M is living in a highly sensitive balance between his condition and his general health and this has to be one of the hardest things that we will have to deal with as he goes through life.

This state of affairs continued without improvement until finally, in the middle of August and not long before another holiday to Portugal, a GOSH registrar suggested we tried adding a probiotic supplement to M’s diet to help his body recover. We had a month to try out this change and it was tough. Whilst everyone had warned us about the difficulty we would face getting M to drink a protein shake, no-one though to mention that we would face similar challenges when introducing the humble probiotic supplement.

I think we tried just about everything to get M to take it, and have a vivid memory of sitting in the breakfast room of a London hotel whilst visiting for the 2012 Paralympics, with M on my lap, a glass of apple juice laced with probiotic on the table in front of me and a medicinal syringe to physically get the mixture into M. I have no doubt that we must have been a sight for sore eyes on that glorious September morning as families surrounded us enjoying their breakfast and I strong-armed M into taking his medicine; and I wonder what tales of family life in UK may have gone back with visitors from around the world.

The good news is that the probiotics helped and by the time of our return visit later in September, we had regained some of our lost footing, though we still weren’t moving along as quickly as any of us would have liked.