When M was admitted to GOSH for a week for repeat scopes back in October 2013, I turned to the wonderful support network that is FABED and asked for some tips on the essential things I needed to take to get us both through that week.  The resulting list was my parent’s survival guide, a resource I found myself turning to once again before our most recent admission.  However, the one area I didn’t cover in that survival guide was what I did to get through those endless hours, especially when M was otherwise entertained or busy at hospital school and my lovely friend, F pinged me an email all the way from Canada to make this very point.  She had her own set of questions about what I’d got up to whilst M was in GOSH, telling me what I’d missed from my previous posts and I thought I’d share with you all my curiosity-satisfying answers.

Where did you sleep? – I do so hope you didn’t need a hotel 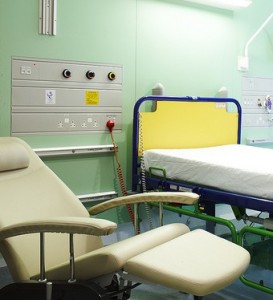 No, no hotel for me, though actually there were times when a hotel room would have been invaluable.  I slept next to M’s bed in a modern version of a medieval torture device: a chair that supposedly converted to a bed, though I think sleeping on a mattress on the floor, or even just the bare floor itself, might have been more comfortable.  There were definitely some mornings when I would have killed for a good night’s sleep or the opportunity for a long soak in a hot bath, but sleeping in “the bay” with 3 other patients including 1 baby meant that my nights were often disturbed.  M’s cubicle contained 1 of the 2 sinks for the 4 beds, which meant that one notable night, I had doctors, nurses and parents trooping through past M’s bed in a steady stream during the early hours as they needed to wash or sanitise hands and access sterile gloves.

The long-term gastro ward is shockingly out-dated and the facilities don’t meet the needs of the patients or their parents.  Unbelievably there is just one bathroom for 16 beds and only 2 other toilet cubicles, so you were constantly having to keep an eye on the bathroom to make sure you could dash in there before it was in use again.  Given this was the location of the height chart too, you can imagine just how in demand that single room was.

What did you eat when you were there? (I can only imagine this expense adding up if you were buying all your own meals)

The expense certainly did add up as I had to provide all food and drink for myself during the admission.  The small kitchen had a fridge which parents were able to keep food in, but I often found myself heading out each day to get some fresh air as well as my meals for the day.  There was also a microwave and crockery and cutlery, so that did make having a hot meal a little easier.  I kept some bread and crackers for breakfast and then would go out to buy sandwiches, ready meals or other snacks for the rest of the day.  There are several supermarkets in the vicinity, so there was reasonable choice, though the largest shop is a Waitrose, which definitely didn’t help with the cost.

I didn’t really eat out too much, though I took G out for meals whilst she and Mike visited and I treated myself to the odd coffee or hot chocolate mid-morning from one of the nearby coffee shops.  I also had a really lovely dinner out with one of my fellow Mums on the ward.  We headed across the road from the hospital to a small Italian restaurant and enjoyed some delicious food, great conversation and a small glass of wine each, whilst the boys were under the watchful care of the nurses!

How did you pass time? – Surely M didn’t need you every second of the day?

The first few days M was reluctant to let me out of his sight for long, especially when he was struggling to cope with the effects of the bowel prep on his system.  He understood that I needed to go out and get something to eat so that I didn’t make myself ill, but I would bring the food back onto the ward to eat at his bedside.  He didn’t necessarily engage with me for most of that time, preferring to be plugged into the TV or playing his tablet or DS, but my presence was very much required.  I took a supply of magazines, books and various puzzle books with me as well as my laptop, so I was able to entertain myself whilst he was absorbed in what he was watching.

Once he started going to school, I spent my time off the hospital ward as much as possible, taking walks in the local area and getting some fresh air or doing the more mundane chores of laundry or tidying up our very small bed area.  I was lucky enough to be able to arrange to meet up with several of the lovely FABED Mums whilst we were there too as their children came in for various appointments or procedures.  It was great to actually meet, sit down and chat with some of these folks who’ve been giving support over the last 4 years and to finally put faces to names.

Did you have opportunities to have ‘a break’?

My only breaks were relatively short ones when M was in school or the evening he went to Scouts.  Some parents lived close enough to be able to go home or even into work during the day, but being over 2 hours away from London made that impossible for me.  The 2 Saturdays when Mike visited, he spent most of his time with M, so G and I could go out and have some quality time together.  We went to a coffee shop for elevenses both weeks, I took her out for lunch the first week and the 3 of us went out for dinner both evenings before they headed home.  We were lucky that there are restaurants nearby that do gluten- and dairy-free food options, so eating out with G proved to be easy to do.  But that was it.  No other breaks for me as it was, all things considered, a relatively short admission and I needed to be advocating M’s needs during our time there, something I just couldn’t take a break from.

How do you stay sane while there?

Who said I did?!  Truthfully, my sanity remained as much in tact as it did thanks to amazing support from family and friends.  The folks who dropped me an email, sent me a text, popped something in the post for M or even arranged for a beautiful bouquet of flowers to turn up completely unexpectedly.  And that’s not even thinking about the wonderful Mums I met on ward, who were all there for varying lengths of stay, for vastly different reasons and who gave me an ear to bend and a shoulder to cry on when I needed them the most.  Believe it or not, we had a lot of fun in the evenings, sitting in the bay, comparing stories, sharing opinions of nurses and consultants, chatting about life and generally putting the world to rights.  Those friendships were made in the hardest of times and the strangest of situations, but are worth more than their weight in gold.  I met amazing parents who are facing much bigger challenges than we have to cope with and yet go about everyday with a smile and a kind word for everyone they meet.  We all had our down days when we needed the support of those around us and I can’t think of a nicer bunch of people to have been through that experience with (Rhys, Lauren, Caroline – you know who you are and thank you!)