In planning our Easter adventure around Scotland, we quickly realised that our desire to visit all the places we were hoping to go would create what can only be described as a whistle-stop tour of the country. We could easily have chosen a half-dozen more places that one of the other of us, or perhaps even both, wanted to see and I can already foresee more visits North being squeezed into our future travel plans. For each location we settled on, we decided to stay just 2 night only, giving us one full day to explore where we were

and so asked G and M to do a little research about different museums they wanted to visit or landmarks they’d like to see. There were no promises that we’d manage to do any or all of these, but I was keen for them to be as excited about our travels as we were.

The first leg of our journey took us to Liverpool, famously home to The Beatles as well as Premier League football clubs, the Grand National and the White Star Shipping Line, owners of the ill-fated Titanic. Mike and I spent a long weekend in the city for our 15th wedding anniversary a couple of years ago and so had already determined that we wanted to take the children to “The Beatles Story” exhibition at Albert Dock. A lengthy Google search by G and M led to the discovery of “Western Approaches”, a museum delving into Liverpool’s role during WW2. As both children have been studying aspects of the First and Second World Wars at school, they quickly decided that this was somewhere they absolutely wanted to go and Mike and I were more than happy to agree. 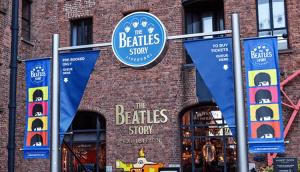 After a quick breakfast in our hotel room, something we usually choose to do as it ensures we have safe cereal and milk for both children whilst we’re away from home, we headed off on foot to our first destination, “The Beatles Story” exhibition. This marvellous museum is based at the iconic Albert Dock and charts the history of The Beatles, starting with childhood stories and finishing with all that the individual members of the band have gone on in their solo careers. As always, we all opted for the audio guides, something that M loves to do as he listens to the stories unfold as he traipses round the exhibits and touring at our own paces, moved from room to room. I’ll be honest and say that M didn’t manage to stay engaged 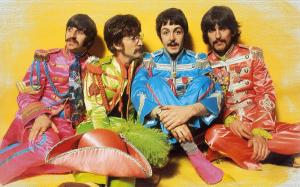 for the entire exhibit, but he did reasonably well and by the time he’d had enough, I was ready to remove my headphones and wander the remaining spaces with him. Both children enjoyed the museum, especially the areas displaying memorabilia and costumes and picked up some interesting facts about one of our favourite bands. They also loved walking around Albert Dock and exploring the multitude of small shops that are there.

From Albert Dock, we walked back to Liverpool One, where we found a fantastic allergy-friendly diner for lunch. I will leave reviewing our dining choices until my next blog, but I will tease you with the tidbit that this lunch-time destination was easily one of the best we went to and M was desperate to go back again if only time had allowed. After a late lunch, it was time to go on to the children’s choice of the Western Approaches War museum. Hidden in a fairly unprepossessing building, I cannot begin to tell you just how fantastic this small museum turned out to be. Based in the wartime bunker beneath Derby House, Western Approaches takes you on a journey explaining just how the Battle of the Atlantic was won by the Allied Forces.

The staff were incredibly knowledgable and helpful and took a keen interest in explaining what we were going to see to both children before we entered. G had just been learning about the Battle of the Atlantic at school and so it seemed a particularly apt museum choice, especially when she was told that young women, not much older than her, would have been working down there during the war years.

What particularly appealed to M whilst we were here was the Treasure Hunt that saw him toting a gas mask case filled with instructions, code-breaking equipment, notepads and a mini UV light around with him. Some of the clues were easier to crack than others and both children had a great time trying to find where they were hidden and working out where they needed to look next. Most of the exhibits were hands on, which is great for children of all ages

and both M and G quickly spotted the link to Bletchley Park and the code-breaking work that went on there during WW2. My favourite bit came right at the end of our visit, when we reached the street scene set up, including unexploded bomb and the tiny canteen asking for 2d for a cup of tea or coffee. I happily paid my 2p over, plus a little bit more to support their cause, and sat down to enjoy it whilst we all played one of the period board games that was available. It was a fantastic way to spend a couple of hours on a fairly grey and miserable afternoon and I would highly recommend this museum to anyone who’s looking for something to do in Liverpool.

The only disappointment with our visit was that we hadn’t realised that the Terracotta Warriors are currently on display at the World Museum, something that Mike and I would both love to take the children to see. We were lucky enough to see them in-situ in Xian when we visited China back in 2001 and want to take advantage of this opportunity to share this fascinating exhibit with G and M. Our plan is to book tickets for a visit there over the summer and have another long weekend in Liverpool, perhaps experiencing some of the other things we didn’t manage to do on this trip.