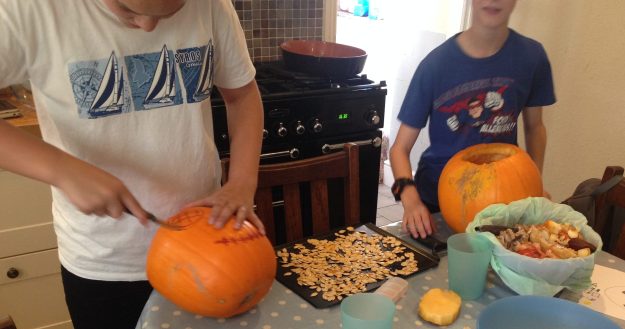 Ok, so it might not be Halloween just yet, but I thought I’d share some photos of the pumpkins that Mike and the children have spent time designing and carving over half-term. Halloween has never been a time to celebrate for me and was certainly never a significant time of year when I was growing up. My childhood was spent making a Guy for Bonfire night, rather than carving a pumpkin for Halloween and I never imagined it would

become a regular part of our household’s routines. However, 20 years on from when I first met Mike in Canada and experienced trick-or-treating North-American style with my university friends, Halloween has become a family time with the children not only carving pumpkins with Mike, but often also with my Mum during half-term.

I’ll be honest, I’m not a fan of Halloween at all.

We don’t go trick-or-treating with the children, though I absolutely support the work of the Teal Pumpkin Project which encourages households to provide non-food treats as a safe alternative to sweets for allergy children, so they can be a part of the experience alongside their friends. And I spend most of the week leading up to the day itself in an increasingly dark mood as October 31st is the anniversary of losing my Dad. It is always a difficult time of year for me, but I’m glad that the children are able to enjoy some fun time being creative with Mike and carving the pumpkins helps them celebrate their dual heritage in a unique way.