A month ago we spent our Saturday afternoon in what can only be described as a most unusual way for our particular family. It had all actually started a few days before, when Mike’s bike had developed a persistent flat tire that no amount of minor repair work was going to fix and he finally decided to take it to our local Halfords store for a complete overhaul. Unfortunately, the prognosis wasn’t good and sadly Mike had to come to terms with the terminal diagnosis that his bike just wasn’t going to make it and it was time to think of finding a 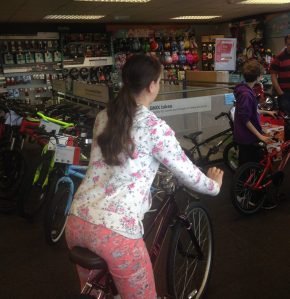 suitable replacement. Not only did Mike need to urgently replace a crucial part of his daily commute, but my Mum had also been reminding me that I needed to actively do something to buy myself the bike that she has bought me as a birthday present for 2 years in a row, and so we headed back to Halfords to see what we could find.

If I was to say that G and M were not too enthused by the prospect of an afternoon investigating potential bike purchases for Mum and Dad, it would absolutely not be an exaggeration, but they really didn’t have much of a choice and so they begrudgingly came along, grumbling all the way. When we first arrived at the shop, it seemed fortuitous that they were having a end-of-season sale, but I really should have realised that being April Fool’s Day, the joke would ultimately be on us. Mike had already done some investigating into some options for me and I swiftly settled on a purple Apollo Elyse that would be everything I needed for future family cycling adventures.

And then the fun started. Whilst Mike explored the 2 floors to see what choices he had, both children took matters into their own hands and found bikes that would suit them too. We had been briefly discussing the fact that both G and M were starting to outgrow the bikes they had at home and the unquestionable allure of some great deals in their end-of-season sales plus a further negotiated discount because we were buying 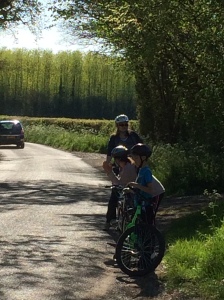 4 bikes, instead of the anticipated 2, meant an attractive offer that we just couldn’t turn down.

It took a couple of weeks to pick up the bikes as they had to be ordered, delivered and serviced before we could finally take them home. Mike’s bike was pressed into instant service and the children were keen to get theirs out for a test run as soon as was humanly possible, so the Easter holidays came at the perfect time to allow them out on some mini adventures with Mike. However, I hadn’t had the same opportunity until last weekend dawned with the most glorious weather and with no homework left to do for either child. We decided to head out in a different direction than the ones they had been in before and cycled along the country lanes winding through the farm land and fields that surround our house. We cycled to the next village and back, not a huge distance by any stretch of the imagination, but a 5 mile introduction to what promises to be some great family adventures for 2017.