If you live in the UK, I doubt you could have missed the fact that it was recently BBC’s Children in Need.  For those of you who reside elsewhere in the world and are wondering what on earth I’m talking about, Children in Need raises money for numerous charities, large and small, who work to bring much needed help to children across the UK.  The evening is celebrated with a TV extravaganza, which sees celebrities singing, dancing and otherwise performing as you’ve never seen them do before, all in the name of fundraising. Children in Need has been running for over 30 years and since 1980 has raised well over £600 million for the children it supports.

This year it set the theme of “Be a Hero” and G and M, as well as thousands of other school children across the UK, were invited to come to school dressed as a hero.  The options were endless and as we walked to school that morning, we passed Superman, Spiderman, Tinkerbell, Violet Incredible, Harry Potter and Florence Nightingale to name but a few.  I’m always interested to see who my two will choose to dress up as, not least because M’s costume almost always inevitably involves some late night sewing and creating by me. 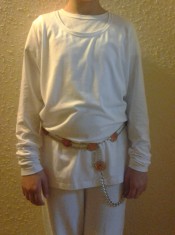 G, after a short discussion with Mike about what her options were, settled on dressing as Princess Leia from the Star Wars trilogy, a choice that fortunately didn’t need much more than a few minor adjustments to the base layers we had.  A long-sleeved white long tunic, a pair of white leggings, her brown boots and a chain-style belt accompanied by the iconic hair-style of 2 coiled bun over her ears and she was dressed and ready for anything the galaxy threw at her.  She was delighted with her costume and I was impressed that it came home almost as white as when she went to school in the morning! 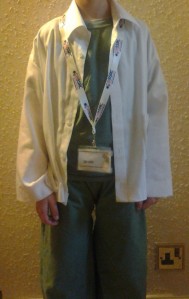 With G’s decision made, I waited nervously for M’s choice of hero, fully expecting him to have chosen someone far more complex, which would leave me scrabbling around for clothes to meet his exacting requirements.  So you can imagine my surprised delight when he went for what is possibly the simplest, but most meaningful choice he’s made in years.  M wanted to honour his very own hero, his gastro consultant at GOSH, Dr H, who has made such a big difference to his life over the last 3 years.  We put him into a pair of home-made scrubs and Mike generously donated a white shirt, which I adapted to be his doctor’s white coat.  A printed name badge declaring him as a “Consultant Paediatric Gastroenterologist” from GOSH finished the look.

Once school was done for the day, we raced home and changed into their onesies, ready for an evening at Stagecoach, before spending the evening at my Mum’s for dinner and the best of BBC light entertainment.  The night raised over an amazing £32 million with more money still to come in and be added to the total.  This will make a big difference to the children it can help support and it’s never too late to donate – just click on this link.

1 thought on “Children in Need”