I am a past master of sneaking vegetables into my children’s dinners.  They’ve unknowingly enjoyed years of grated carrot mixed into baked beans; parsnips, swede, turnip or even cauliflower mashed into potatoes; and pureed peppers or mushrooms or sometimes both stirred into pasta dishes or satay chicken.  I’m not alone.  Mum grates courgette into their “Pasta Thursday” meal at her house each week and so far, we’ve both got away with it.  But, as my children grow older and their tastebuds mature, I’ve noticed they’ve become more discerning when there’s an additional flavour added into the dish and so I’m having to become even more cunning when it comes to get extra vegetables into my reluctant duo. 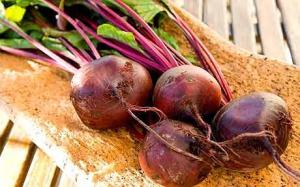 With a new bake in mind as well as the need to introduce a new vegetable to G, I decided to take a firm favourite in our household. the good ol’ chocolate cake and add that well-known twist, beetroot.  M has always enjoyed beetroot, but I have never been able to convince G to try even the tiniest morsel of it more than once in her 10 years.  I was confident that hiding it in chocolate cake would work and so took Nigella’s recipe and worked my magic to make a M-friendly version. 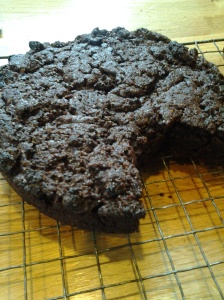 I was a little nervous that eagle-eyed M might notice the beetroot baking in the oven and put 2 and 2 together when the chocolate cake appeared later, but he doesn’t seem to have made the connection, though I know he’s a little suspicious that it might be the “surprise” ingredient in the cake.  Both children enjoyed their slices, but G has forbidden me from telling her what the ingredients are until the whole cake is finished – just in case she decides she won’t eat any more once she knows.  It’s been a great success and yet another way to get one of those all important 5-a-day into G and M.