My foray into the world of the local press over the last week has taught me some interesting life lessons.  Last week was all about my appearance on our local BBC radio station to talk about EGID, National Eosinophilic Awareness Week and baking for a child with multiple food allergies.  I had some great feedback from people who’d listened to what I had to say and thoroughly enjoyed the experience.  The pros were all about getting that message out there and raising some much needed awareness about this rare condition. The cons were that I didn’t know what I was going to be asked beforehand as it was all completely unscripted and so missed giving some information that would, in my opinion, have made the interview even better. 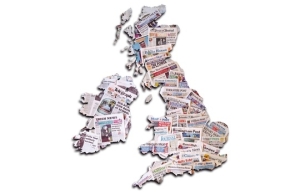 Today an article featuring our family appeared in our local paper.  The interview hadn’t been the easiest as I took the phone-call at work and could be spotted standing on one leg about 10 feet from the front of the office, with my left hand raised in the air in a vain attempt to get a decent enough signal to be heard at the other end – well maybe not really, but you get the picture!  I don’t find explaining EGID the easiest thing in the world when sitting face to face with the person asking the question: there’s a tendency for the individual to begin to glaze over, right up until I mention that M struggles with multiple food allergies as part of his condition.  At that point, their interest sparks up again as everybody inevitably knows somebody who can’t eat wheat/gluten/dairy* (*delete as appropriate).  Now, imagine trying to discuss a rare and virtually unknown condition over the idiosyncrasies of the mobile phone network – nigh on impossible.

However, despite it all, I’m not disappointed with the article that was written.  Okay, so the headline was misleading given our actual aim is to raise some much needed awareness about EGID rather than food allergies, but the reporter did include lots of important and accurate information.  I was delighted that she included some words about FABED, without whom I doubt I’d have found the confidence to even approach the press to report about M, as this was the bit that was missing from my radio interview on Friday.  To my delight, the paper has also agreed to run a small follow-up piece next week about our fundraising efforts this week and report how much money we have managed to raise for FABED.  That will be my opportunity to include FABED’s website details and to encourage our community to consider supporting this worthy cause.

With all the excitement of 2 appearances in the local press within the space of a week, this media mogul decided she needed a break of the mundane task of family dinner and instead tonight’s menu was courtesy of Mike:

4 thoughts on “Lessons about the Press”