Last Tuesday was Shrove Tuesday and time for a pancake party.  In previous years I have used a recipe that makes Canadian style pancakes, which taste delicious with bacon and maple syrup and which I frequently adapt to make sweetcorn fritters for tea.  This year I fancied having a crack at the more traditional British pancakes, which are much thinner than their North American cousins and not dissimilar to the French crepe. 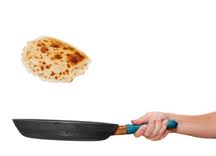 Now, I knew this wasn’t going to be an easy make, after all the 3 key ingredients of your average pancake are flour, milk and egg, all of which are a no-no when cooking for G and M. I fell back on an old and trusted Delia Smith recipe and simply replaced each item with a M-friendly alternative.  Instead of the listed ingredients, I used rice flour, rice milk and ground flaxseed meal.  My final recipe can be found here.  M was so excited at the prospect of pancakes for tea that he helped me mix the batter and the result was better than I expected. It actually looked a lot like “normal” pancake batter and, as we prepared it the night before, I popped it into the fridge ready for the following day.

Despite the pleas of my hungry pair for a pancake breakfast, I played the role of mean Mummy and instead insisted that they waited for teatime to arrive.  We agreed on a dinner combining both savoury and sweet pancakes.  We started with plain pancakes topped with a little melted butter, bacon, a little cheese and some vegetables and by the time they had devoured those, both G and M were keen to see what I would make for pudding. 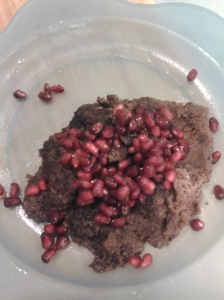 I added some of Antony Worrall Thompson’s Chocolate and Hazelnut spread, which is amazingly safe for M to enjoy, as well as a dash of vanilla essence to the remains of my batter.  I cooked the chocolate pancakes, though I wish I had made them a little smaller as the batter took longer to cook and fell apart when serving.  M had his covered with pomegranate arils, whilst G had hers with banana slices.  Easy to do, quick to eat and a definite winner for a great end to a delicious meal!