Sleepless nights are the bane of many new parents’ lives.  You don’t realise just how dependent you are on 8 uninterrupted hours until you no longer have them.  We were truly lucky with G.  She was one of those very irritating babies who slept through from 6 weeks old and quickly developed a habit of 10-12 hours each night, meaning we never really suffered with early mornings either.

The first few weeks of M’s life lulled us into a false sense of security.  He spent many of those early days sleeping, something that is typical of preemie babies I’ve learned.  However, once we’d hit, and passed, the magical point of his due date, everything changed and not for the better.  From the age of about 4 or 5 months to the present day, I can count the number of full nights’ sleep on the fingers of one hand.  Actually, I don’t even  need that hand to enumerate those memorable occasions because the only undisturbed nights that Mike and I have enjoyed in the last 8 years are those when M has been staying with my Mum. 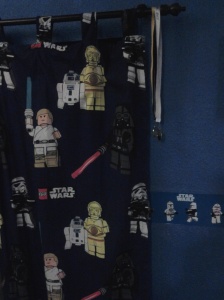 Last year, we thought we had finally turned a bit of a corner with M’s sleep habits.  We had persuaded him, through the lure of sticker charts and a much-desired Lego Millennium Falcon, to start going to sleep in his room.   His bedroom was revamped for his birthday to match his passion for everything Lego Star Wars and became a place befitting of his 7 year-old status.  I won’t pretend that it was all plain-sailing, but we gradually moved away from the constant shouts downstairs for food or stories until he was finally falling asleep in his own bed, albeit close to 11pm most nights.  His 2am visits into us also slowly started to disappear and it really felt like the sleep issues were on their way out.

Unfortunately, we were once again counting our chickens too soon and, in the middle of 2013, everything reverted back to the old “norm” with a bump.  I can only assume that a big part of this dramatic shift was the unexpected decline in M’s health that had started in the April.  Since then, M has been almost completely unable to fall asleep by himself and spends almost every night pleading with us to “settle” him at bedtime.  It doesn’t matter has much settling we do, within minutes of us leaving him tucked up in bed and heading downstairs for our own dinner or jobs to do, M is up on his feet, singing and dancing to whichever CD is that night’s pick.  The rhythmic thuds that accompany our evening meals are a constant reminder of just how awake he is, but he seems unable to switch off and relax.

Around 9.30pm the questions start floating down the stairs: “Can I have a snack because I’m starving?”, “I need a drink – I’m dying of thirst” or, my personal favourite, “What time is Mummy coming to bed?”  It is this last request that inevitably traps me between a rock and a hard place.  If I go upstairs after about 10.15pm, M will climb into bed beside me and be fast asleep within 10 minutes; BUT any attempt made too early is a complete disaster.

M will just lie next to me, hunting for Odlaw, Wenda and the rest of the Where’s Wally? gang, chattering away and almost without fail, I will be in dreamland before him.

Since Christmas, things have been getting progressively worse and Mike and I are both almost at wits’ end.  This last weekend was spectacularly bad on the sleeping front and we’ve had to do some quick thinking to try and get things back on track.  One of the biggest complaints we have from M is that he is hungry, regardless of how much he’s eaten throughout the day.

To avoid a repeat of Saturday’s demand for a snack at 11.45pm, we have introduced a relatively substantial snack for M before he goes to bed.  As soon as both G and M are washed, in their pjs and otherwise ready for bed, they can each select a snack or two to have, along with a mug of either hot chocolate or hot milk and honey.  We tried this for the first time last night and appear to have scored an early success with no subsequent food necessary before he went to sleep.

Secondly, we’ve given M an incentive to improve his behaviour at bedtime and reduce his demands on us.  We’re off on a big family holiday later this year and both children are keen to earn some spending money for whilst we’re abroad. M’s modest request for £5.90 for the 3 weeks has been judiciously upped a little and he can earn stickers (yes, we’re back to that damn reward system once again) for working hard to achieve this target.  The stickers are awarded retrospectively, so last night’s bedtime routine and today’s behaviour will be assessed at snack-time tonight and stickers given accordingly.

Draining as all this is, I have been able to draw some comfort from discovering that we are not the only EGID family struggling with sleep issues at the moment.  Another Mum recently posted about her anxiety over her child’s sleeping on the FABED forum and asked for help. Within a relatively short space of time, replies flooded in from across the country, from other parents who have been there and who are quite probably still dealing with it.  I found it particularly interesting to read the perspective of a now adult EGID-sufferer, who was able to explain to us all exactly how the condition can impact on the body and therefore on sleep.

So, for all you parents out there who are longing for a good night’s sleep, believe me when I say that I feel your pain and will be hoping that the sandman visits your homes sooner rather than later tonight.