The incredible summer weather that we’ve been enjoying this weekend, can only mean one thing; it’s time for a barbecue.  True to form, by around 5pm on Friday evening, the shelves of all the local supermarkets had been cleared of the sausages, burgers and other BBQ meats, but for once that didn’t spoil our plans.  Most of the BBQ selections available contain wheat, gluten or even soya, which makes them unsuitable for use in our household.

Instead, I took to a recipe that we developed after seeing a similar meal prepared on Canadian TV programme “You’ve gotta eat here“.  For those of you who haven’t seen this series, and I highly recommend that you don’t even attempt to watch it when feeling peckish,  presenter John Catucci tours Canada, searching out exceptional meals found at various cafes, diners and restaurants across the country.  The food featured not only tastes good, but often comes in proportions that defeat even those with the healthiest of appetites.  Whilst the burgers we watched being made were traditional in using beef, I adapted them to use family favourites, Welsh lamb and fresh mint.  You can find the recipe here.

The final recipe is easy and quick to prepare, delicious to eat and best of all, contains nothing that is not M-friendly.  They take around 5 minutes to cook on the BBQ or indeed in the oven and were perfect for a Saturday lunch in the sun. 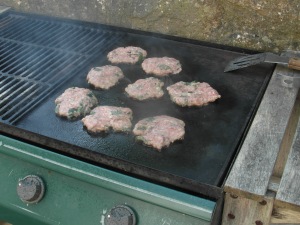 One of things that M has been missing, other than the by now famous egg mayonnaise sandwiches, is Bakewell tarts.  Around 12 months ago, we had discovered Costa‘s gluten-free Cherry bakewells and, as they were dairy, soya and wheat-free and M was trialling egg at the time, we were able to try them out as a treat.  M loved them and we had found something he could eat when we popped out for a coffee or were on a road trip.

However, this January’s decision to tighten up M’s diet meant these had to go back on to his forbidden list.  It was a disappointment as there is so little available when we’re out and about, but we had the hope that the next trial of egg would mean that he might be able to start eating them once again.  Sadly, the current relapse and subsequent medical response means that there is no likelihood of this for the foreseeable future.

M has been hit hard by his current flare-up and so I decided to make a weekend of it and bake some much needed M-friendly treats for both M and G.  I quickly decided to investigate whether there was any possibility of making a M-friendly Bakewell tart. Having never even attempted to make Bakewell tarts in my lifetime, even before all the food allergies hit my kitchen, I looked up a recipe to see if I could adapt it.

I was confident I could make a reasonable everything-free pastry base, having successfully mastered pastry at Christmas for mince pies.  I have quickly learned that vegan recipes are my friends as they don’t contain any animal products and so instantly remove the issue of being dairy- and egg-free.  So, I quickly moved on to the next item on the list, raspberry jam.  Fortunately, M suffers no ill-effects from fruit jams at the moment, so that was an easy tick and on to the final element of the recipe: the frangipane.

This filled me with dread.  Frangipane is an almond-flavoured sweet pastry cream which, depending on the particular recipe you decide to follow, contains anywhere between 1 and 3 eggs and I just couldn’t see a way round it.  With little hope and as a somewhat last-ditch attempt, I used that faithful friend, Dr Google, once again to see if someone, somewhere had created a vegan alternative to frangipane.  Imagine my delight on discovering this wonderful recipe from fellow blogger, lucysfriendlyfoods.

I noted the ingredients, checked my store cupboards to see what I already had in stock and drew up my shopping list.  A quick visit to the supermarket and we had everything I needed to bake this masterpiece.  To my delight, every step of this recipe was easy to follow and put together.  40 minutes in the oven and my work was done. 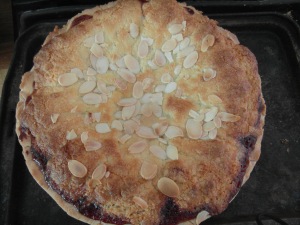 M was thrilled and had to try a slice before it had cooled fully.  The slice I gave him disappeared quickly and his only comment was that he would prefer me to make individual tarts next time.  What’s more, G also tried some and enjoyed it.  All in all, this weekend has been a resounding success, be it the BBQ burgers or the Bakewell tart.

1 thought on “BBQs and Bakewell tarts”