This weekend has been a lot less manic than the last.  Other than the obligatory Fathers’ Day celebrations on Sunday, we also had 2 very important appointments to keep on Sunday afternoon.  G and M took their very first individual Speech and Drama LAMDA exams.  It’ll be a wait of another 6-8 weeks until we hear the results, but I’m proud of them both for having a go at this new challenge.

So, we’ve spent time playing games, watching TV, doing some homework and enjoying some quiet family time.  We’ve also worked on a project that has become very important to G over the last couple of weeks – her swap box.

This is an idea that was recommended to me about a year ago by a parent at M’s school.  She had overheard a conversation I was having with a fellow Mum about having to anticipate when treats might be given out in class to avoid having to deal with M’s frustration when he couldn’t have one.  She asked if we’d ever thought of providing a Swap box to be kept in the classroom. 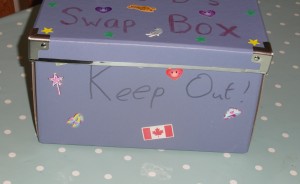 I looked at her blankly, listened intently and then wondered why I had never thought of such a simple solution to this problem.  The idea really is an easy one.  We provided a box, decorated by M, that was filled with a selection of sweets, biscuits and other treats that were M-friendly.  Whenever M is given a treat for any reason in the classroom – birthday celebrations, leaving gifts, rewards for good behaviour, Advent chocolates or Easter eggs –  he is allowed to take what he’s been given and swap it for a safe alternative from his box.  This means that he never feels excluded from all that is going on and we can be assured that he isn’t being given any food that could cause an allergic reaction.

I had never considered the need for G to have same, but in the last couple of weeks she has been unable to have caramels or chocolates that have been brought into school to share.  I was hoping to maybe make it to the end of term (well there are only 5 weeks left) and sort G’s swap box over the summer holidays, but alas, that wasn’t to be.  G was adamant that she needed one now and so we found a box and allowed her to decorate it this weekend.  I’ve filled it with a small supply of Haribo sweets, fruit snacks and some M-friendly packets of biscuits and she’s taken it into school this morning to stash with her teacher. 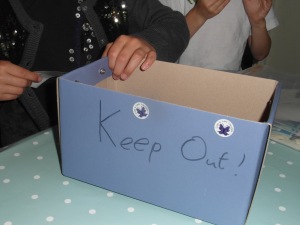 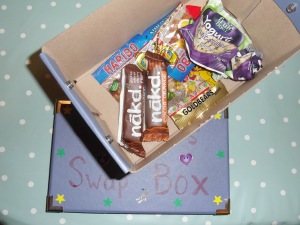 It really is one of the simplest suggestions I’ve come across in dealing with M’s condition and has proven to be invaluable as he has found no need to strop or complain about being different to his friends.  After all, when you’re struggling with quite so many challenges, being able to take part with everyone else is really worth it’s weight in gold.

4 thoughts on “The Secret of the Swap Box”