At the end of April, we enjoyed a great evening joining in the virtual awards ceremony for the FreeFrom Food Awards 2020 (#FFFA20). It’s always great fun to go to the evening as not only do I finally get to share with the rest of the family the gold winners from the categories

I’ve judged, but it’s also a fantastic opportunity to discover some of the other great products that might prove to be safe for M and something new we can introduce to his food repertoire.

This year was no exception, despite lockdown meaning that the Awards could only be held via Zoom and there were a couple of products I made note of to search out as soon as the celebrations were done. Thanks to the power of shopping on the internet, at least one of these new discoveries has already arrived with us, gone through quarantine and been used. Winning a gold in the innovation category, the Gluten free Wholegrain bread mix by The Box Bakery fascinated us all. The idea that we (by which I of course actually mean G and M) could whip up a safe loaf with nothing more than the box, the oven and some water obviously meant that it was something that had to be tried as soon as I could get my hands on it. 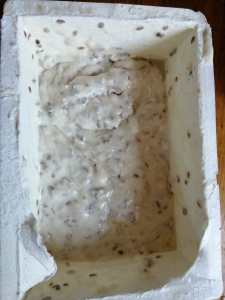 In almost no time at all, the boxes arrived at our house and with VE day celebrations looming, it seemed to be the perfect opportunity to get M started on his first loaf of bread, especially during lockdown. I left him to it, with some minimal supervision from Mike, and the end result was absolutely brilliant. It really was as easy as it…well…as it says on the box. He measured and added the water, gave it a good shake and popped it into the oven. The final loaf needed a few minutes more than was recommended, but it was worth the wait. Both M and G were delighted with the loaf and it’s nice to be able to add another safe bread to M’s diet. The flavour, texture and ease of baking all scored highly in M’s books and he was especially delighted by the crust. He also much preferred it fresh from the oven, but was happy to finish it off in sandwiches the following day. 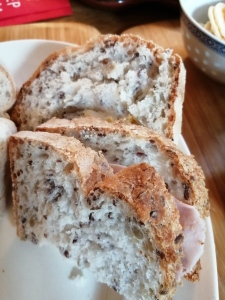